Vanished In The Night by Eileen Carr (thoughts) 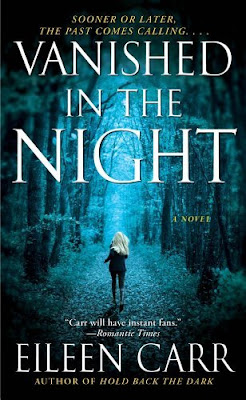 Veronica Osborne has had enough problems with the police, thanks to her volatile father. So when tall, strapping Sergeant Zach McKnight shows up at her door, she’s prepared for anything—except the news that her beloved missing brother, Max, has been dead for nearly twenty years . . . ever since he ran away.

. . . until she meets one who’d risk everything to protect her.

Appalled when the police suspect her father of Max’s murder, Veronica begins her own investigation. But as her surprising role in her brother’s disappearance surfaces, so do more bodies. The ghosts of Max’s past are working hard to hide the truth, while another, more sinister force will do anything to expose it. How far will a killer go to get revenge? And can Zach stop him before he targets the woman Zach’s coming to love?"

This was a book that I just didn't want to put down! From the very beginning, I was drawn into the story and into Veronica's life. This book was filled with suspense and was a fast-paced read. Veronica has lived a difficult life that isn't made any easier when the bones from her brother are found after he has been missing for over twenty years. She finds herself pulled into the investigation especially after the mysterious death of her father. I loved how the author wrote this book from multiple viewpoints. It kept me constantly turning the pages as I couldn't wait to see what happened next. The author's writing style almost reminded me a bit of Mary Higgins Clark who is an old favorite of mine. It was really good and the suspense was constant throughout. The romance between the two main characters was cute and added to the story but it really wasn't the focus of the book. The book was more a thriller than anything and I just couldn't get enough. My only complaint with the book was at times I had trouble keeping the characters straight especially at the beginning. Once I got further into the book though, I didn't have any problems and found myself immersed in the story. This is an author that I can't wait to read more of! Recommended to fans of romantic suspense as well as fans of mysteries and thrillers.

Bottom Line: A solid mystery that kept me reading nonstop!

Disclosure: I received this book as part of a book tour with Gallery & Pocket Books Romance Tour Group.