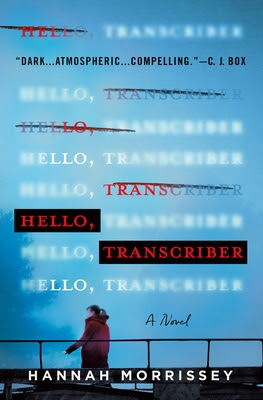 "Every night, while the street lamps shed the only light on Wisconsin's most crime-ridden city, police transcriber Hazel Greenlee listens as detectives divulge Black Harbor's gruesome secrets. As an aspiring writer, Hazel believes that writing a novel could be her only ticket out of this frozen hellscape. And then her neighbor confesses to hiding the body of an overdose victim in a dumpster.

The suspicious death is linked to Candy Man, a notorious drug dealer. Now Hazel has a first row seat to the investigation and becomes captivated by the lead detective, Nikolai Kole. Intrigued by the prospects of gathering eyewitness intel for her book, Hazel joins Kole in exploring Black Harbor's darkest side. As the investigation unfolds, Hazel will learn just how far she'll go for a good story―even if it means destroying her marriage and luring the killer to her as she plunges deeper into the city she's desperate to claw her way out of."
My Thoughts:
I was so excited when I received an ARC of this book and then I just let it languish on my shelves.  I truly hate when that happens even if it does happen sometimes more often than I would like.  This book just sounded from the description above like my type of book.  And there were certainly elements that made this my type of read, but there were also things that I struggled with.  Where this book shines in my opinion is in its' atmosphere.  This author can write - that's for certain.  She was able to make me feel like I was right there in this small town where it feels like nothing good ever happens.  If you loved the vibes that Gillian Flynn created in Sharp Objects with Camille's hometown, then you will also love those similar feeling dark vibes that are present in this book.  It's that tense, ominous feeling where it almost feels like Black Harbor is alive from the way that it is described.  And I loved that part of it - I am always here for a book with a strong atmosphere (for lack of a better way to describe it).  Also, this book is dark so be sure to check content warnings if you need them.  Hazel is an interesting main character.  She is one of those characters that we as the reader never quite understand her motivations.  All of this I was on board with.  What I wasn't on board with as much was her questionable choices and the lack of explanation/reasoning behind them.  I'm going to keep things spoiler free but I will say that it felt like Hazel was on self destruct mode but we are never given the full reasons why.  It made it very hard to understand or relate to the choices that she was making.  Basically, this is a nice way of saying that she made me frustrated which caused me to set the book down multiple times.  Don't get me wrong, I was also compelled to pick it back up to see where it was all going and how it was going to end.  But I was also so annoyed by Hazel and the decisions that she was making because there was no real context given on the why's behind it all.  I'll leave it at that because to say more would be diving into spoiler territory.  If you've read this one, what did you think of Hazel and the decisions she made throughout this book?  I'm truly curious!
Readers who enjoy atmospheric, dark reads, those readers who are looking for books with similar vibes to Sharp Objects (notice I say vibes, these are two very different books otherwise), and those readers who enjoy a grittier mystery should pick this book up.  There were enough elements to this book that I enjoyed where I would probably rate this book four stars if I actually still did ratings and I do plan on reading more by this author.  Because the vibes in this book were immaculate if you like darker reads.  If you prefer more mystery, then this book might not be for you.
Disclosure:  I received an advanced review copy from the publisher.  Honest thoughts are my own.
Posted by samantha.1020 at 3:04 PM 3 comments: