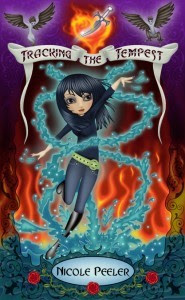 "Tracking the Tempest begins four months–and one eyebrow sacrificed to magical training–after the close of Tempest Rising. During that time, Jane’s been busy honing her supernatural powers and enjoying her newfound sense of confidence. Rockabill may not yet be heaven, but she’s realized it’s home. Valentine's Day is fast approaching, and Ryu - Jane's bloodsucking boyfriend - can't let a major holiday go by without getting all gratuitous. An overwhelming dose of boyfriend interference and a last-minute ticket to Boston later, and Jane's life is thrown off course.

But Ryu’s best laid plans inevitably create more upheaval than even he can anticipate, and Jane winds up embroiled in an investigation involving a spree of gruesome killings committed by a being of tremendous power . . .

. . . who, much to Jane’s surprise, happens to be another halfling."

So Jane is back and better than ever in my opinion. For those of you who haven't had a chance to read Tempest Rising then I would recommend that you start at the very beginning. Because this is a series that needs to be read in order as Tracking the Tempest begins basically right after Tempest Rising left off. (And for the record my review may have spoilers...you've been warned!) The story begins with Jane continuing her training with her new supernatural powers. Jane is one of those characters that you just have to love. She isn't quite confident with her new skills but she isn't afraid to give anything new a try either. She goes to visit her boyfriend Ryu and gets caught up within a new mystery relating to halflings and the evil Jarl. The storyline instantly had me hooked and I couldn't wait to see what was going to happen next. I liked the way the author incorporated the idea of a "halfling" that had basically been raised in a lab as a test subject into the story. Very interesting and unique which really added to the book. I still found myself not really caring for Ryu (Jane's boyfriend) all that much so imagine my surprise when I read the ending of the book. I was both surprised and pleased and cannot wait to see what will happen in the next book. This book was a definite page turner and I found myself wanting more after I finished. What makes these books so good in my opinion is that they are both fun to read and slightly addictive. Highly recommended to fans of urban fantasy but like I said previously, start with Tempest Rising if you haven't had the chance to read it yet.

Bottom Line: A delightful read and a great series!

Disclosure: This was sent to me for review from the publisher quite awhile ago and unfortunately I'm just now sharing my thoughts. But the pleasure I got from reading this book was my own :)

P.S.- Here is a link to my thoughts on Tempest Rising. I'm thinking about bringing back my bottom line to my reviews considering I don't rate my reviews in any way. Thoughts on this anyone?? I'm also going to attempt and catch up a bit on reviews this week (still behind by 4) so be warned. And I've been mulling over some changes to my blog to freshen it up a bit. More on that later....happy reading!