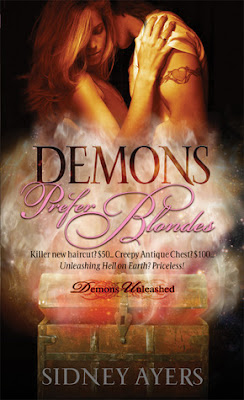 Demons Prefer Blondes begins with Lucy Gregory opening an old chest and unleashing a box full of demons. Afterwards, she discovers that parts of her life have been hidden from her as she is half human and half succubus. Now it is up to Lucy and her friends to save the world while in the midst of all that she discovers love as well.

The premise of this book sounded unique and interesting which instantly made me want to read it. And while the storyline was interesting and fun, it ended up being just an okay read for me. Let's start off with what I liked first which were the characters. There were lots of characters in this story but one of my favorites was a secondary character named Kalli. The author portrayed her with a hint of mystery, her past is alluded to a couple of times, but what made me like her so much is that she wasn't your typical sidekick character. In fact, I wanted to read more just about her. The two main characters were likeable enough as well with Rafe's character being the most fleshed out. Lucy took finding out that she was a succubus amazingly well which didn't quite ring true to me. She had doubts at the beginning but then all of a sudden she was completely at ease with her new powers. The storyline wasn't amazingly original but what worked for it was the author's writing and the characters that added to it.

I did struggle with the book at times as it never really drew me in. I found it easy to set aside before picking it back up again. The page turning suspense was never really there for me which was a disappointment. I would have to like to have learned more about Lucy's new powers as a succubus as well. But overall while I didn't love this read, I did think that it was okay bordering on good. I would read more by this author especially if the next book she writes features Rafe's sister Coby as the ending left me with a few questions. Recommended but with some hesitations.

Disclosure: I was sent this book for review from the publisher.
Posted by samantha.1020 at 10:57 AM