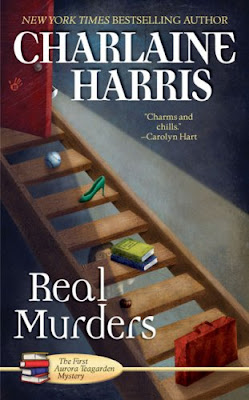 "Though a small town at heart, Lawrenceton, Georgia, has its dark side-and crime buffs. One of whom is librarian Aurora "Roe" Teagarden, a member of the Real Murders Club, which meets once a month to analyze famous cases. It's a harmless pastime-until the night she finds a member killed in a manner that eerily resembles the crime the club was about to discuss. And as other brutal "copycat" killings follow, Roe will have to uncover the person behind the terrifying game, one that casts all the members of Real Murders, herself included, as prime suspects-or potential victims."

Real Murders was an interesting beginning to this cozy mystery series and I'm looking forward to reading more! I've been wanting to begin this series every since I finished the last book in the Harper Connelly series (which I loved) by this same author. I'm happy to say that I wasn't disappointed in the least by this book and actually enjoyed it quite a lot. "Roe" is a part of a club that analyzes serial killers from the past. Unfortunately, one of the members of the club is found dead and soon it becomes very apparent that one of those same members must be the killer. Roe was such a great main character for a variety of reasons. She's a librarian for one which instantly made me like her ;) But she is also a character that is growing into herself. She starts off the book as a quieter, shy type of girl and by the end of the book she is really beginning to realize all of the possibilities that she has in front of her. I liked seeing the growth of her character throughout the story and I am looking forward to seeing it continue in future books. The mystery was a good whodunnit and for a cozy it was surprisingly grislier than I would have thought. It kept me hooked though as I tried to figure out who the killer could be. And let me tell you that I was nowhere close to being right...the ending took me by complete surprise!

This book ended up to a surprisingly good read, and this is a series that I will be continuing on with. Yes...another series (sometimes I wonder what I am thinking with ALL of these series). But I'm looking forward to seeing what kind of trouble Roe manages to get herself into next. Recommended to fans of cozy mysteries!

Bottom Line: A fun read that kept me guessing!

Disclosure: Another lovely book checked out from my local library :)
Posted by samantha.1020 at 4:36 PM