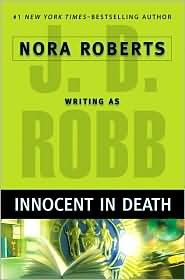 Innocent in Death begins with the death of a teacher for no apparent reason. Eve is called in to investigate and instantly suspects murder. But Eve is thrown a curveball when Roarke's ex shows up unexpectedly and enters their life. Is there going to be trouble in paradise???

I love this series (which is old news)! What made this book great was the twist Robb put in this book with Roarke's ex popping up and trying to come into his life once again. We got to see another side of Eve as she tries to deal with this latest piece of Roarke's history. I could of kicked Roarke myself a few times throughout the book as he was being entirely too dense when it came to Eve's feelings. I felt like this really added to the storyline and I didn't want to put this book down. In fact, I was less concerned with the murder that Eve was investigating and more concerned about Eve and Roarke's relationship. The characters in these books really make them great and are the reason why this series is still going strong. I always highly recommend this series but you have to start at the beginning because seeing the characters develop along the way is what makes this series amazing!

Bottom Line: A must read series in my opinion!

Disclosure: I was given a copy of this book from a friend who enjoys this series as much as I do.