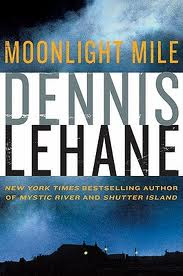 Dennis Lehane is fast becoming one of my favorite authors for a number of reasons but the main reason being I love the characters he creates. This book is the 6th book in the series and even though I've never read any of the previous books, I still grew to care about the characters from the very beginning of the story.

Moonlight Mile begins with private investigator Patrick Kenzie getting a late night phone call and then being approached by a former client the next day. The client is the aunt of a young girl that Patrick found years ago and was also part of a case that still haunts him to this day. Now she believes that her niece is once again missing but the problem is no one will believe her including the police themselves.

I was pulled into this story almost instantly mainly because the characters were so likeable and so realistically portrayed. I loved the relationship between Patrick and Angie from the very beginning. Their relationship wasn't perfect, nor did they pretend like it was, but it came across as real and it played an important role throughout the story. Patrick seemed to be at a crossroads with his job as a private investigator at the beginning of the story and that came across as realistic as well. I liked how all of the storylines worked together within the book. Although this was a suspenseful read, what really made the story come alive for me were the characters. I was constantly rooting for them and wanting to make sure that everything turned out okay for them. The storyline itself was good and helped to make this a book that I didn't want to put down. After reading Shutter Island last year, I figured that I would never know exactly what was going on. And I was right....I didn't see the ending coming whatsoever and was surprised by how everything turned out. My only complaint isn't really a complaint, but I have to admit to wondering if I missed anything starting this far into the series. I didn't feel like it was a problem while I was reading the story though. I just think that I would like to see Angie and Patrick's relationship evolve from the very beginning. All in all, I am really glad that I got the chance to read this series and will definitely be going back and starting at the very beginning. Recommended to anyone looking for a suspenseful read!

Disclosure: I was sent this book for review from a Shelf Awareness offer by the publisher (I belive) in exchange for an honest review.
Posted by samantha.1020 at 5:28 PM