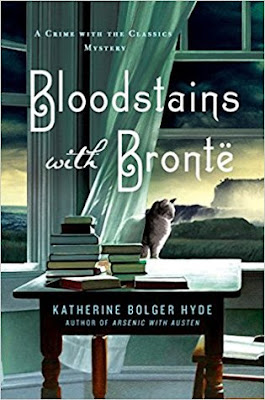 "It’s a dark and stormy autumn on the Oregon coast. Windy Corner, the Victorian mansion Emily Cavanaugh inherited in Arsenic with Austen, is being remodeled into a writers' retreat. Two of the young workers, Jake and Roman, are showing too much of the wrong kind of interest in Katie, Emily's young single-mother housekeeper. Their boss, Jeremiah, is a disturbing presence in a different way with his obsessive, tormented piety. Soon the passions in the house grow as dark and stormy as the weather, and Emily begins to feel as if she’s living in a Brontë novel.

Meanwhile, to raise money for the local clinic, Emily and Katie host a murder mystery dinner on Halloween night. All goes well until the supposed corpse turns up actually dead—with Katie standing over him, a bloody knife in her hand.

Luke Richards, local sheriff and Emily’s true love, is forced to regard Katie as a suspect, but Emily refuses to accept the situation. Her loyalty to Katie crashes against her duty to Luke and to the truth as she fights to save Katie from a murder charge."

Bloodstains with Bronte was a fun follow-up and second book in this cozy mystery series.  Also, how great are these titles?  I was really looking forward to jumping back into this series as I enjoyed the first book so much.  In this book, Emily is working on converting her house into a writer's retreat. As I absolutely love her house and the descriptions of it, I couldn't get enough of this part of the story.  I find it so fun to imagine inheriting a big rambling house like this filled with secret passageways and other fun stuff.  It is just one of those things that makes these books such a pleasure to read!  Then she is talked into hosting a murder mystery dinner at her house and that is when the real trouble begins.  I've got to be honest and say that the premise is what made want to read this book (and ultimately got my reading this series) in the first place.  Such a fun idea!  This book had my attention from the very beginning thanks to all of this.  I just couldn't stop reading and really didn't want to.  That's really what I am loving about this series - how easily I fall into the books and the fact that I just can't seem to stop reading.  It makes for a really great reading experience.

All of those positives being said, I did not care for Emily's choices in this book and found her to be quite frustrating at times.  She basically punished Luke for doing his job and I just couldn't get behind that.  I did appreciate though that the story wasn't told just from her viewpoint or I don't think that I would have enjoyed this one as much.  Instead we also got to see Luke's point of view and even Katie's at times.  I adore her as a character so much so that was really a delightful surprise!  I really appreciated that we got to see more of her history in this book even if it wasn't always easy to read about.  I've been curious as to who her daughter's father was and now we know (although I won't spoil anything by saying who).  The mystery portion of this book was fun although I was able to pick out the killer myself.  I definitely didn't figure out the why's behind it all until the very end which helped to make this still a suspenseful read.

Overall, I enjoyed this book and thought that it was a solid follow-up to book one.  I'm really looking forward to continuing on with this series whenever the next book is released.  I have added this series to my must read cozy series list because I have enjoyed the books so much.  This book was a fun read and a great change of pace from some of the darker reads that I have finished lately.  And while I had a few complaints with it, I still really enjoyed my time with this book.  That should tell you everything that you need to know!  I don't think that you necessarily "have" to read this series in order but with only two books, why wouldn't you?  Recommended to fans of cozy mystery series and also those who enjoy classics.  The author does a great job of really including pieces here and there from books by the authors that she includes in her titles (and I've actually read Wuthering Heights so that's a win for me).