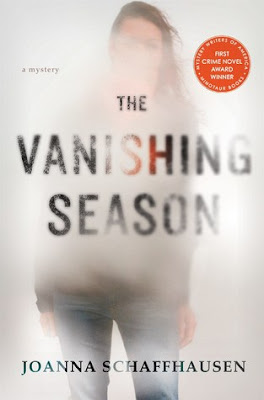 "Ellery Hathaway knows a thing or two about serial killers, but not through her police training. She's an officer in sleepy Woodbury, MA, where a bicycle theft still makes the newspapers. No one there knows she was once victim number seventeen in the grisly story of serial killer Francis Michael Coben. The only victim who lived.

When three people disappear from her town in three years, all around her birthday—the day she was kidnapped so long ago—Ellery fears someone knows her secret. Someone very dangerous. Her superiors dismiss her concerns, but Ellery knows the vanishing season is coming and anyone could be next. She contacts the one man she knows will believe her: the FBI agent who saved her from a killer’s closet all those years ago.

Agent Reed Markham made his name and fame on the back of the Coben case, but his fortunes have since turned. His marriage is in shambles, his bosses think he's washed up, and worst of all, he blew a major investigation. When Ellery calls him, he can’t help but wonder: sure, he rescued her, but was she ever truly saved? His greatest triumph is Ellery’s waking nightmare, and now both of them are about to be sucked into the past, back to the case that made them...with a killer who can't let go."

The Vanishing Season was a thrilling read that left me really excited to read more by this author.  It was also a much darker mystery than I expected which I enjoyed.  I don't know why that I thought it was going to be closer to a cozy mystery but that definitely wasn't the case!  Instead, this book was filled with suspense and had me reading late into the night.  In this book, Ellery is investigating the disappearances of three different individuals who she believes are now dead and possibly the victims of a serial killer.  She has no proof though and no one will listen which is why she then turns to Reed Markham, the agent that saved her when she was younger from a serial killer.  That's enough right there to get things started, and to get me as the reader turning the pages.  I loved that I was instantly caught up within the pages of this mystery.  What happened to Ellery when she was a young girl was horrifying but she has basically hidden her past from everyone that is in her life now.  Those secrets though are about to brought into the open as someone else is about to go missing.  I felt like this added such a different layer of tension to the book because as the reader you are just waiting to see when her past will be revealed.

I also really enjoyed the fact that because Ellery kept her past hidden from others that there is a layer of mistrust of her intentions present.  I'm trying not to say too much but you are led to wonder on if she is right that there is a serial killer at work or if there are other reasons behind her pushing for these investigations.  I won't say more than that though!  I really enjoyed both Ellery and Reed as main characters - I would love if this was just the beginning of a new mystery series focusing on them!  They are both so damaged but in different ways.  I just couldn't get enough of either of them.  The ending was intense and unexpected - I didn't figure out who the killer was until I was supposed to.  At that point I found myself unable to stop reading as I just needed to see how it would all end.  I was left wanting more from these characters, more from this story.....but all in a good way as I just wasn't ready to see the book end.  I can easily say that this is an author that I will be watching and reading more of!

Overall I really, really enjoyed my reading experience with this book!  It was dark, creepy, and thrilling - everything that I enjoy in a great mystery read!  I really couldn't get enough of it which should be apparent in my review.  Ha!  I would say that I flew through the pages but I read it on my e-reader so should I say I swiped through the pages as past as I could?  LOL!  Honestly it was a really great mystery and I'm so glad that I had the chance to read it.  I will be reading whatever this author writes next since I enjoyed this one so much!  I would recommend this one to fans of mysteries and thrillers alike.  Highly recommended!

Bottom Line:  A really great mystery that I couldn't put down!

The Vanishing Season just released on December 5th if you want to check it out now!