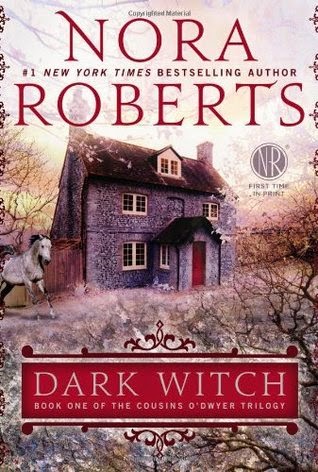 Iona Sheehan comes to Ireland looking for both family and something more.  She has lived her life up until now feeling vaguely dissatisfied as if she was missing out on something important.  It isn't until she meets her cousins Branna and Connor O' Dwyer that she realizes the missing piece might by her heritage and recently discovered powers.  It will be up to Iona though to really find herself and let her powers as a witch awaken before she comes to battle a centuries old evil named Cabhan.  Because if she isn't able to do this, it may destroy her new found love and family.

As soon as I heard that Nora Roberts was coming out with a new paranormal trilogy, I wanted to read it.  Simple as that to be honest.  I loved her Key trilogy and Three Sisters trilogy enough that I have read them multiple times each.  And although I hate to make comparisons, this first book was very reminiscent at times of some of those books.  For me, I went into this book expecting something similar because what she writes works.  I literally gobbled up all of those other books in a matter of days.  Couldn't get enough.  This one was good but not as good as those other two trilogies and I'm not honestly sure what the difference was.  I think for me it was a slight lack of connection to both of the characters.  I am huge on connecting with a book and for me this is why I liked but didn't love this one.

Iona comes into the book looking for family as her own family never really cared for her the way that she needed them to.  She doesn't realize it but she is looking for love.  Enter Boyle, her new gruff boss that doesn't really share his feelings with anyone.  From those descriptions, you would think that their chemistry would really click but for me it just didn't quite do it.  I wanted to see them get over all of their emotional obstacles to find a happy ever after, but I wasn't connected enough to the story to really want it.  It is hard to explain other than that.  This book sets everything up perfectly for what is to come in the next two books but it didn't do it in a way that left me emotionally invested.  I just needed a little bit more to make this book a great read.  All of that being said, I did find this one to be a page turner.  The storyline may be a bit similar to others that she has written but it was different enough that I was intrigued.  I really liked both of her cousin's characters.  I'm eager to see if I click with their stories more than I did with this one.  And I have to reiterate that I liked this book.  I just feel like I expected a bit more and was  harder on it since I have loved some of her other books so much.

Overall, this was a good beginning to a new trilogy even if I had a few issues connecting to the characters.  I have high hopes that I will enjoy the next two books even more as they will be focusing on her cousins Branna and Connor.  It was an easy book to sink into and I found myself flying through the pages.  I just wanted a bit more so maybe I will get that with the next book.  Recommended but with a few hesitations as there are other of her books that are better and I enjoyed more (if interested definitely try the Three Sisters and Key trilogies).

Bottom Line:  A good read but one that just left me on the edge of finding it to be a great read.

Disclosure:  I checked this one out from my local library.  Thoughts are my own.
Posted by samantha.1020 at 3:00 AM