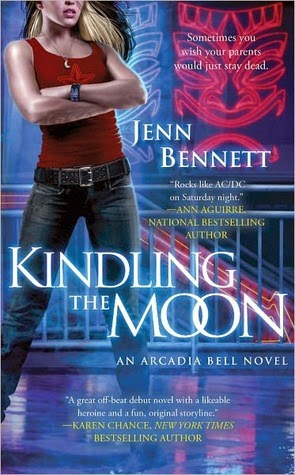 In Kindling the Moon we meet Arcadia Bell, a bartender in hiding, thanks to her famous parents who are on the run for murder.  Because her parents are wanted by the occult community, Arcadia has to keep her identity secret from everyone around her.  Everything changes though when her parents are spotted for the first time in years.  Now the occult community is demanding justice: either her parents or Arcadia herself are what they want and they want retribution.  It is up to Arcadia to figure out what really happened all those years ago and to find the demon that was present during the murders.  Can she find the truth before time runs out?

This was one of the best beginnings to an urban fantasy series that I have read in a long time!  Arcadia's one of those characters that you just can't help but like.  I found myself instantly drawn into the story.  In fact, one of the best things about this book in my opinion is that I was never overwhelmed by the world building even though this is the first in a series.  Very often an author can give almost too many details as they set up a new series, but Bennett managed to set up this new world without overdoing it.  I also appreciated the fact that she managed to leave questions unanswered especially in regards to Cady (as Arcadia is known) and her abilities.  In fact, I feel like we just skimmed the surface a bit when it comes to all of the characters and what we know about them.  But in the best possible way!  We were given a taste and I'm thinking that future books will really allow for us to learn more about all of the main characters.  I'm hoping that means we continue to see lots more of Len as I loved the relationship that was beginning to develop between him and Cady.  He isn't your typical hero as he is part demon, older, and has a child of his own that he raises.  I thought he was great!  And I really want to see more of him!

This book was very fast paced and hard to put down.  I found myself eager to keep reading even when I should have been doing other things.  Like laundry.  I was very, very close to instantly picking up the second book as soon as I finished this one.  As it is, I'm more than ready to pick up Summoning the Night right now!  The ending of this book didn't take me by surprise as halfway through I kind of guessed the direction that this book was going.  It didn't matter though as I still found myself reading with breathless anticipation.  Very satisfying conclusion but bring on book two!

All in all, this was a great beginning to this series, and I'm kicking myself for not starting it sooner.  I am super excited to have found such a great series though so that is a positive!  I finished this one in a matter of days and was left feeling completely satisfied.  Such a great read!  This book is one that I would easily recommend to fans of both urban fantasy and paranormal romance.  Highly recommended!

Bottom Line:  A fresh and original beginning to this urban fantasy series!  Oh so good!

Disclosure:  I received a copy of this book thanks to the publisher for review.  Thoughts are my own!
Posted by samantha.1020 at 3:30 AM