There Was an Old Woman by Hallie Ephron (thoughts) 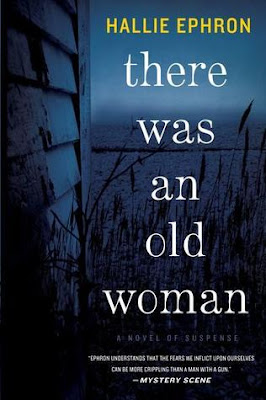 There Was an Old Woman was one of those reads that left me sitting on the fence when it comes to my feelings on it.  I enjoyed it for the most part but was left wanting by the end of the novel.  And while this book didn't blow me out of the water it left me interested in reading more by this author.

Evie Ferrante gets the call that she both half expects/dreads.  Her alcoholic mother is in the hospital for what seems to possibly be the last time.  The only difference is that this time it is up to Evie and not her sister to go clean up the messes that their mother has left.  When Evie gets to her dying mother's house though, many weird questions arise.  Where did her mother get all of the money that Evie finds hidden in the house?  Why does it seem like someone besides Evie and her mother has been there?  And what was her mother up to before she fell into this alcohol induced coma?  Evie's mother's neighbor might have some of the answers except she is an elderly woman that seems to have lots of her own problems.  It will be up to Evie to figure out what is going on before someone really gets hurt!

There Was an Old Woman both worked and didn't work for me.  The best part of the book was that it really made me think.  Mina Yetner is Evie's mom's elderly neighbor that everyone thinks is senile and going slightly crazy.  She has a hard time getting people to listen to her and take her seriously which makes her begin to question herself.  It's a valid topic as there are many of the elderly that are mistreated and not really valued as people nowadays which is just sad.  Mina played a key role in this novel and I really, really liked her character.  It was because of her that I liked this book as much as I did. She had me turning the pages faster and faster towards the end wanting to see how it would all play out. I thought that the author did a really solid job of fleshing out her character and the history of the airplane crash (and how it related to her) really added to the book!  In fact if the author had based the book completely around her I might have had a different and slightly more enjoyable reading experience.

What didn't work for me was that the book was slightly predictable at times.  I had two of the bad guys picked out almost from the very beginning.  I also guessed as to what was going on with the main storyline pretty early on.  From the summary given on Goodreads I figured this book would be a bit more creepy then it actually was or more intense.  And it was intense at the end but for different reasons.  Mainly because I wanted to know that everything was going to be okay for Mina.  I also struggled a bit with the ending.  It just seemed to lack that extra punch that I was hoping for.  Again that comes around to the predictability factor which really detracted from my full enjoyment of this book.

Overall while I didn't love this book I did like it enough that I want to try this author again.  In fact, I've already got another of her books sitting on my shelves.  I think that there are going to be people that love this book more than I did.  But for me the predictability and lack of suspense really stopped me from loving this book. This ended up being one of those books that was good but not great.  Mina's character alone made the book for me, and I definitely appreciate a book that makes me think (both positives).  In the end I would recommend it but with a few reservations.

Bottom Line:  A suspenseful read, a good read, but just not a great read.

Disclosure:  I received a copy of this book for review from the publisher courtesy of Edelweiss.  Thoughts are my own!
Posted by samantha.1020 at 4:00 AM