The Arrangement by Mary Balogh (thoughts) 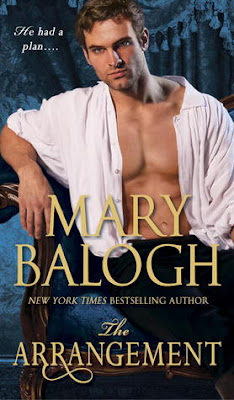 I basically jumped at the chance to read this book as I've heard lots of good reviews for Mary Balogh's books and wanted to give her a try myself.  The Arrangement was a pleasant read that I enjoyed but it was less than I expected it to be.  I'm not sure if I had too high of expectations (entirely possible) or if it was the fact that I just didn't quite connect to the book like I had hoped to.  Either way it ended up being a good read with more positives than negatives.

Sophia Fry lives a quiet almost non-existent life with her aunt and her aunt's family.  She keeps to herself entirely and has fallen into the trap of believing that she really is the mouse that others refer her to as.  That all changes when she makes the split decision to help stop the marriage trap set up to snare Vincent Hunt who is a wealthy viscount.  Soon after Sophia finds herself caught up in an arrangement that is basically out of her control.  Her choices are to get married to a man she barely knows or find herself out on the streets with nothing.  She decides to take a chance on marriage but how she will find happiness will be entirely up to her!

I went into reading this book not really knowing anything about it. It was a great way to read this book because this book was unexpected in so many ways.  Vincent and Sophia didn't instantly fall in love like so many other romance novels.  Instead it took time and trust before they really began to realize their feelings for one another.  I really appreciated that because it helped me to connect to the characters and it felt more realistic to me.  Vincent is blind which was also very unexpected as I obviously missed that from reading the summary.  I was a bit worried with how the author would portray his disability (and whether he would magically be able to see at some point) but in the end I thought she did a really nice job with it.  Vincent wasn't your typical hero and Sophia definitely wasn't your typical romance heroine but together they worked quite nicely!  I even found myself impatient at times because I was just so ready for them to find their happy ever after.  The one thing that they did lack as a couple was with communicating their feelings.  I wanted to shake them both at certain points of the book for just not telling the other one how they felt.  But the ending came about quite nicely which helped me to appreciate their relationship that much more.

All of those things make it seem like I really liked the book and I did.  But I did have a few issues with it as well and the main one was Sophia's lack of self esteem.  I understood it to a certain point but I really wanted her to grow more in that regard.  It felt to me that it took others believing in her rather than herself before she started to grow in strength.  Her referring to herself constantly as a mouse (or even other characters in the book comparing her to one) annoyed me.  She was so much more than that and it was an issue for me that she didn't believe in herself more.  It was harder for me to connect with her as a character because of it.

Overall, I ended up really appreciating this book for a variety of reasons but the main one was because it was so unpredictable.  I really don't think I've read another historical romance like it!  I love the concept of The Survivor's Club and will be going back to read the first book in this series.  I'm also eager to see which of the survivors book three will be about.  I would recommend this book to historical romance fans that want something a bit different compared to your typical romance read.  Because in the end even though this book had some faults, it was a still a pretty darn good read!

Bottom Line:  A romance that took its time building but was worth it in the end!

Disclosure:  I received a copy of this book from the publisher as part of a TLC Book Tour.  Thoughts are my own as always!
Posted by samantha.1020 at 4:00 AM