The Hunter by Monica McCarty (thoughts) 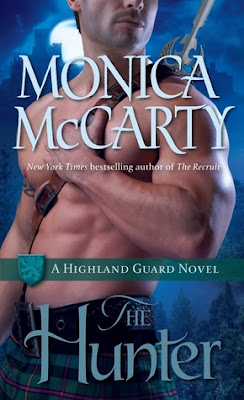 Scottish highlander romance?  Yes, please and yum!  I'm a sucker for a good historical romance lately so I couldn't resist joining in on the blog tour for this book (even though there are like six books before this one).  And since I have never read a highlander romance before I wasn't exactly sure if I was going to like it or not.  That being said I had my expectations set low/medium but they were shattered as I tore thru this book in less than three days.  I can't wait to go back to the first book in this series to see how it all began!

In The Hunter, Ewen Lamont is part of the notorious highland guard that is fighting to get King Robert the Bruce crowned as king.  He is known for his attention to detail and ability to find/track anything.  When he meets a nun named Sister Genna his entire world is turned on its' axis.  How can he possibly be attracted to a nun?  And what kind of nun acts like she acts?  What he doesn't know is that Genna has secrets of her own that will make their paths cross in dangerous ways.  But it is the chemistry between them that causes them both to start reevaluating their lives and plans for the future.

Yowsers!  This book instantly captured my attention from the very beginning!  I couldn't put it down and flew through the pages which left me wanting more.  Luckily I have the first six books in this series to look forward to because I NEED more!  I'll admit that the first few chapters had me on edge.  I don't want to go into spoilers but there was an event that had me uncomfortable and left me wondering if I was going to be able to get past it.  But before I knew it I found myself immersed in the book wanting to know what was going to happen next.  I loved the fact that Genna stood up for herself and was so independent.  I also liked that she didn't want to change just for marriage.  I really respected that about her.  But I also LOVED the chemistry between her and Ewen.  Whew!  There were a few very HOT pages in this book if I do say so myself.  I wasn't completely thrilled with the ending but it wasn't bad.  Just not what I was expecting I guess.  Don't let that stop you from reading this book though because it is definitely worth the read!

Overall, this was a book that kept me engrossed and left me wanting more.  I have no complaints other than why did I never try a highlander romance before now???  I've definitely been missing out if they are all like this!  If you are a fan of historical romances with LOTS of chemistry then definitely give this one a try.  As for me, I have to go back to the beginning now.  Even though I didn't miss out (at all based on my reading experience) starting this series so far into it, I really want to see how it all began.  I want to get to know the other members of the highland guard so I plan on doing just that.  Definitely a book that I would recommend especially for your summer reading pleasures :)

Bottom Line:  A book that had me captivated from beginning to end!

Disclosure:  I was sent a copy of this book from the publisher as part of a TLC book tour.  The thoughts are my own!