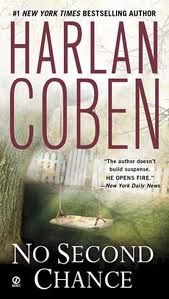 No Second Chance was everything that I expected it to be.  It was fast paced, page turning action that constantly left me wondering what could possibly happen next.  This is my third book by Coben and although it wasn't my favorite (that still remains as my first read Tell No One by Coben) it was a solid second.

In this book Dr. Marc Seidman wakes up from a coma to realize that he has lost everything.  His infant daughter has disappeared and his wife is dead.  The worst part of all is that all of Marc's memories from that awful day seem to be unclear and slightly unreliable thanks in large part to the gunshot wounds that he sustained.  But who would want Marc dead and his family destroyed?  And the real question is what happened to his daughter?  Things go from bad to worse as Marc finally hears from his daughter's kidnappers...can he get her back without getting himself killed in the process???

This book had me almost on edge from the very beginning.  A missing child??  That's a sensitive subject for me as a parent so I was unsure if I would enjoy the book or not if I'm being honest.  But even though I was uneasy about the subject matter I soon found myself caught in the author's tangled web.  I COULD NOT put this book down!  The thing about Coben's books is that they are so easy to say one more chapter to.  And that one chapter leads to another and then another....before you know it is 1:00 AM and you need to be up in less than five hours for work.  Yep, I was that girl thanks to this book.  My only slight complaint with this book was that I managed to guess the bad guy halfway through.  It didn't matter because I wasn't for sure and this is an author that constantly keeps you guessing.  But the ending was a slight let down because I realized that I had figured it out.  Even though I really hadn't.  If that makes any kind of sense to you :)  What the author did do well with the ending was come up with a realistic solution for the way things were resolved.  I'm always careful about spoilers but I will say that I was wondering how in the world he was going to be able to tie everything up.  And he took something that would have been a horrific experience for any parent and ended it in a satisfying way.  I'm not going to say any more than that so don't ask!  (Unless you've read this book that is and then we can discuss!)

Tense?  Thrilling?  Unputdownable?  Yes, yes, and a resounding yes!  This book practically had me biting my fingernails at times because of the suspense.  I'm a huge fan of this author and I've only read three of his books.  If you are a fan of thrillers and haven't read Coben before now then why not???  He is quite a talented author with a knack for keeping you guessing until the very end.  I would definitely recommend this book to those readers who are fans of suspense.  And don't let the touchy subject matter keep you from trying this one because it is definitely worth the read!  Recommended!

Bottom Line:  A breathtaking read that caused me to lose sleep!

Disclosure:  This book was loaned to me from a kind coworker.
Posted by samantha.1020 at 6:20 PM