The One I Left Behind by Jennifer McMahon (thoughts) 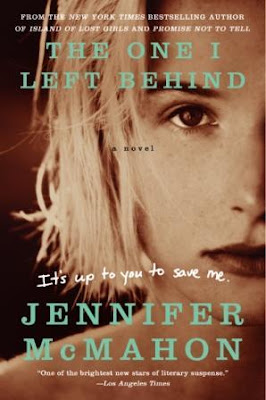 The One I Left Behind was nail bitingly good and left me wondering why I hadn't tried this author before now!  I can never decide if it is a good or bad thing when I feel this way.  On one hand, I have so many other books to look forward to by McMahon.  But on the other hand, I keep thinking, "Where have I been???"  Neither are bad but I'm anxious to read more by her!

The One I Left Behind tells the story of Reggie and the summer that changed her life forever.  Told in two parts, the book weaves between that summer and her present day life.  Back in 1985, Reggie experienced firsthand the horrors of a serial killer when her mother went missing and no trace of her was found besides her right hand.  Mysteriously after that the killings seem to stop.  Reggie is living as normal a life as possible years later until the unthinkable happens.  Her mother is found alive and it looks like the killer is back.

Books like this are ones that I want to tell everyone about.  I found myself caught up in Reggie's memories of that summer.  I questioned whether every person that she came into contact with was the killer.  And I felt for her as we watched her struggle with learning who her mom really was.  The author turned the suspense on almost instantly which made it all too easy for me to turn the pages as fast as I could.  And the two storylines really worked together in a way that made me invested in the book.  I HAD to know what happened that summer and what was going to happen next.  Who the killer could be.  It all came together to add different layers of tension that kept me reading long after I should have gone to bed.  This book was dark and thrilling and everything that I wanted it to be!

The characters were some of the best parts of the book because the author never really let you know what their motivations were.  It left me guessing and second guessing all of their actions as I tried to figure out what was going on.  Reggie's experiences and memories from that summer really allowed for me to connect with her.  And you guys should know by now that I'm all about connecting with the characters of the books I read. I also liked that there was a secondary mystery between Reggie and her friends.  It made the book that much more interesting as I couldn't help but try to figure everything out.  Sitting here thinking about it, I realize that I don't really have any complaints to share.  There were a few loose ends left hanging but overall I really liked where the author took the book.  I feel like she pulled off the ultimate thriller:  lots of dark suspense, questions that needed answers, and tons of chilling atmosphere.  Nicely done if I do say so myself!

Overall, I was wowed by this book!  It was fast paced, tense, and dark....and I loved every minute I spent reading it.  I'm going out on a limb here since it is so early in the year but I'm guessing that this book will end up on my top reads list.  It was seriously that good!  I've already added this author's other books to my TBR list.  And I'll be recommending this one to anyone who listens.  Just be warned that it was spooky enough that I had to put it away one night when I was reading :)  I'm such a wimp sometimes!  Highly recommended!

Bottom Line:  An intense read that I just couldn't get enough of!

Disclosure:  I was sent a copy of this book for review from the publisher as part of a TLC Book Tour.  My thoughts are always my own.