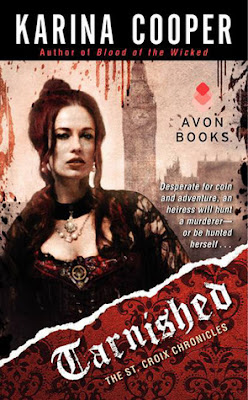 Tarnished was a unique and engaging read that left me eager to read the sequel Gilded.  It started off a bit slowly for me but before I knew it I found myself utterly lost in Cherry's world.  In this book Cherry St. Croix lives two lives.  She lives her respectable life as a part of London society above the drift.  But that is only one of the two lives that she leads: she also is a collector, who at night goes below the drift on hunts for various unsavory individuals.  When she is asked to hunt down the individual responsible for murdering a bunch of "sweets" below the drift, Cherry finds herself in way over her head.  But it seems that this madman has focused himself on her, and Cherry is going to have to do everything it takes not to become a victim herself.

One of the things that I liked most about this book was the unique storyline.  Cherry isn't your typical respectable lady, instead she is an opium addict who lives on the fringes of the respectable London society due to her family history.  She is both educated and independent which I always appreciate in a main character!  I loved the idea of the double life that she was leading..it made the book that much more intriguing as I was on constant alert wondering if she would be found out.  And the setting of the book was such an unusual idea.  Basically, London's high society moved above the drift when the living conditions below became too much.  Everyone below the drift is considered to be less respectable or in the slums.  Cherry is forced to wear goggles to help her see when she is below.  Different details like this really made the book stand out for me.  It just made for a really interesting setting for the story and I really appreciated how different it was from a lot of the books out there!

The story did start off a bit slowly for me.  I think the reasoning behind that was due to two things.  One, there was a TON of world building going on in the beginning of the book.  This is the first book in the series so I think that the author was getting things set up for books to come.  Secondly, I had a hard time connecting to Cherry at first.  It wasn't that the author failed at fleshing her out...actually she did a really great job in making her motivations come across in a way that felt realistic.  I just didn't connect.  I'm glad that I persevered and kept reading though because the ending was INTENSE!  I had no idea or inkling of what was coming and the author just kept the surprises coming.  She left enough open that I think we will learn more in the next book without leaving me feeling unsatisfied.  It was nicely done and really helped me to end up connecting to Cherry.

Overall, I found this to be a solid read!  If I gave ratings I would probably rate it 4 out of 5 stars.  It wasn't without its' flaws but I really ended up enjoying this book.  Happily enough, I already have Gilded loaded on my reader and will be reading it very soon.  If you are a fan of the steampunk genre, then I would definitely tell you to give this one a try.  I'll be also trying out this author's other series since this one worked out so well for me.  Recommended!

Bottom Line:  A solid beginning to this steampunk series!

Disclosure:  I received a copy of this book courtesy of the publisher and Edelweiss.  The thoughts are always my own!
Posted by samantha.1020 at 5:00 AM