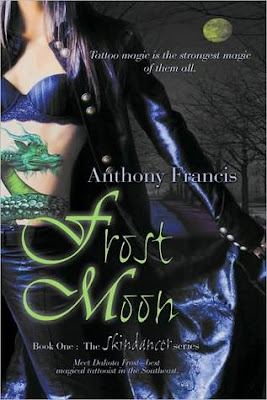 "In an alternate Atlanta where magic is practiced openly, where witches sip coffee at local cafes, shapeshifters party at urban clubs, vampires rule the southern night like gangsters, and mysterious creatures command dark caverns beneath the city, Dakota Frost's talents are coveted by all. She's the best magical tattooist in the southeast, a Skindancer, able to bring her amazing tats to life. When a serial killer begins stalking Atlanta's tattooed elite, the police and the Feds seek Dakota's help. Can she find the killer on the dark fringe of the city's Edgeworld? Among its powerful outcasts and tortured loners, what kind of enemies and allies will she attract? Will they see her as an invader, as a seducer, as an unexpected champion ... or as delicious prey?"

Frost Moon was an interesting beginning to a dark and gritty urban fantasy series. Dakota lives in a world filled with magic and magical beings although it isn't acknowledged by all of society. She was one of the most unique characters that I have ever read about, and I really enjoyed her personality. I felt like we got a really good look at her character throughout the novel which helped me to connect to the story. The author wasn't afraid to take chances with the storyline which I really liked. I just never knew what to expect which kept me constantly on my toes as I was reading. My favorite thing about the book though was Dakota's ability to do magical tattoos. I loved the descriptions of the tattoos, the idea of how they could actually move, and everything else that went along with it. It was a unique concept and it really made the book more enjoyable for me. The book also had a variety of interesting characters that I hope to see in future books. My only complaint with this book was that at times it had so much going on that I would lose track of the mystery. Luckily enough though, the end of the book tied everything together very nicely which added to my enjoyment of the book that much more.

All in all, this was a very enjoyable beginning to this urban fantasy series. It was darker than I expected and very unique which added to my enjoyment of the novel. I'm looking forward to continuing on with this series....I'm sure that Dakota will manage to get herself in lots more trouble :) Recommended!

Bottom Line: An interesting beginning to an urban fantasy series with a main character that I can't wait to read more of!

Disclosure: I received a copy of this book courtesy of the publisher and NetGalley. My thanks!
Posted by samantha.1020 at 3:17 PM