Under The Moon by Natalie J. Damschroder (thoughts) 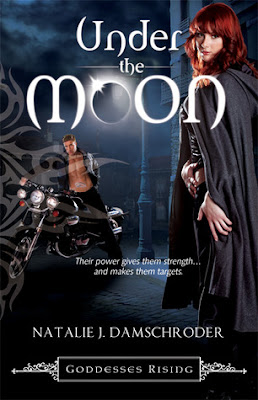 "Quinn Caldwell is the epitome of a modern goddess. Her power source is the moon, her abilities restricted only by physical resources and lunar phase. She runs a consulting business and her father's bar, serves on the board of the ancient Society for Goddess Education and Defense, and yearns for Nick Jarrett, professional goddess protector and the soul mate she can never have.

But someone has developed the rare and difficult ability to drain a goddess of her powers, and Quinn is a target. With the world thinking Nick has gone rogue (whatever that means) and that Quinn is influenced by "family ties" she didn't know she had, keeping themselves safe while working to find the enemy proves harder each day."

Under the Moon is the beginning to a new paranormal romance series featuring goddesses and their protectors. Quinn is a goddess who derives her powers and abilities from the moon. It gives her great abilities during the full moon when her powers are the strongest and leaves her almost completely normal afterwards. I found this to be an interesting concept as it left Quinn very vulnerable at times. One of the things that was really unique about this book was the idea of goddesses and the fact that the goddesses got their powers from different things. Rain, oceans, and crystals were just some of the things that the different goddesses used to enhance their abilities. The book itself was very interesting as Quinn finds herself caught up in a mystery where her fellow goddesses are being drained of their powers. She soon comes to realize that the "leech" has something to do with her and the family that she knows little about. This made for an interesting storyline, and I found myself immersed in the mystery that was surrounding Quinn. Plus, there was a nice little chemistry going on between Nick and Quinn that really added to the book in my opinion. The only problem that I had was that I think I expected a little more focus on the romance. Instead, I found the book to be more plot oriented which worked out fine in the end once I adjusted my expectations. I also didn't entirely care for the triangle that was present between Sam, Quinn, and Nick. But I have a feeling that Sam may show up in later books which would be a good thing :)

All in all, I found this to be a good read with lots of potential! I'm looking forward to reading more in this series in the future. This was my first read on my Kindle Fire and it was a great experience (although I do think I will always prefer an actual book). Recommended to fans of paranormal romance!

Bottom Line: An interesting beginning to a new series....

Disclosure: I read this book on my Kindle courtesy of Netgalley and the publisher.
Posted by samantha.1020 at 1:18 PM