Murder at the Vicarage by Agatha Christie (thoughts) 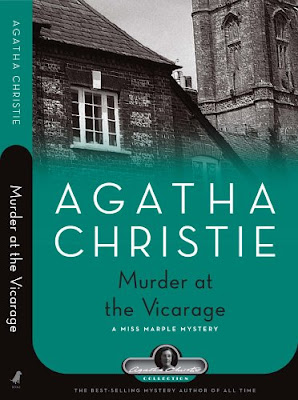 "The first Miss Marple mystery, one which tests all her powers of observation and deduction.

“Anyone who murdered Colonel Protheroe,” declared the parson, brandishing a carving knife above a joint of roast beef, “would be doing the world at large a favor!”

It was a careless remark for a man of the cloth. And one which was to come back and haunt the clergyman just a few hours later—when the Colonel is found shot dead in the clergyman’s study. But as Miss Marple soon discovers, the whole village seems to have had a motive to kill Colonel Protheroe."

Murder at the Vicarage begins with the death of an unliked man where everyone in the village becomes a suspect in his death. This was my 1st Miss Marple read and I found it to be an enjoyable mystery. Agatha Christie was a very talented mystery writer and one of my favorite things about her is her ability to make all of her characters seem guilty at some point. This leads the reader into suspecting anyone and everyone which is exactly what I did :) In the case of this book I guessed the killer at the beginning but Christie had me so turned around as I was reading the book that by the end I didn't even suspect the killer which made the ending still come as a surprise. There was a colorful cast of characters (otherwise known as suspects) that all had reasons for wanting the victim dead that played various roles in the story. My only complaint was that I was taken back a bit by the fact that at times it seemed like Miss Marple didn't play an important role in the mystery that was going on. By the end of the book though, she shines as the reader sees how much of the mystery she was able to solve on her own.

This was a fun mystery that kept me guessing the entire time that I read the book. I'm looking forward to reading more Miss Marple mysteries and hopefully I will read everything that she has written at some point. And although this wasn't my favorite book by Christie, I found it to be a really solid mystery. Recommended!

Bottom Line: A great beginning to the Miss Marple series!

Disclosure: I checked this book out from my local libary ;)
Posted by samantha.1020 at 5:33 PM