The Remains of the Dead by Wendy Roberts (thoughts) 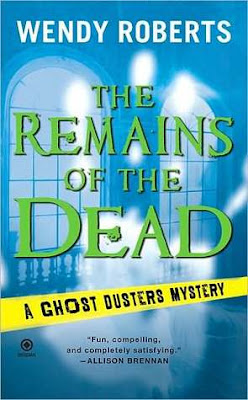 "Sadie Novak's got the kind of job that kills cocktail chatter dead: she owns Scene-2-Clean a crime scene cleanup company. And if wiping up after murders weren't spooky enough, she can also see and talk to the ghosts of the victims...

When grieving relatives hire Sadie and her employee, ex-cop Zack Bowman, to clean up after the murder-suicide of Trudy and Grant Toth, Sadie figures she's bound to meet at least one chatty ghost. But Kent, the man Sadie first encounters at the scene, is very much alive--so much so, that Sadie soon finds herself agreeing to a date with him.

Then a real ghost shows up--the oddly silent spirit of Trudy, who seems determined to prove that her husband's innocence, and inspires Sadie to track down the real killer. But as she scours the crime scene, Sadie quickly realizes she's in way over her head, that Kent has a strange connection to the dead couple, and that someone wants her to give up the ghost...for good."

Hmm....I'm kind of stuck on what to say about this one. I was in the mood for a cozy mystery and I always enjoy the paranormal so I figured that I would end up loving this book. I ended up liking it but not loving it like I expected. Sadie has a job that no one wants to do and a "skill" that no one would believe in if she told them about it. Her only employee Zach knows that she is able to "talk" to ghosts but chooses to ignore the fact that she does. Sadie begins a new cleanup job and gets involved in the mystery surrounding the death. So this book was interesting in the fact that it is completely unusual. Sadie's job and her ability to communicate with the dead are different than what is out there relating to the paranormal. The mystery that she found herself caught up in was fascinating as the ghost wouldn't actually "speak" to Sadie. Sadie was left to trying to figure out herself what the ghost was trying to communicate which turned out to be a dangerous job for her. There was an instant chemistry between Sadie and Zach that left me intrigued. It was hinted at a couple of different times but nothing really panned out so I'll have to wait and see what happens in future books.

Although I enjoyed the mystery and the unique storyline, I never really found myself caught up within the story. I was a bit disconnected at times and found that I wasn't actually too worried about who the bad guy was. That being said, by the end I found my reading groove and didn't want to put it down. The ending was a bit of a surprise which is always a positive. All in all, a good read but it just wasn't my favorite. I'm still planning on continuing on with the series and hopefully it will get better as it goes on. Recommended but with a few reservations.

Bottom Line: An interesting read but not my favorite.

Disclosure: I checked this one out from my local library.
Posted by samantha.1020 at 5:13 PM