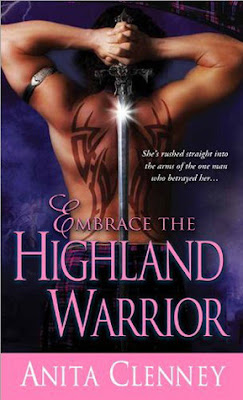 "Cody MacBain let the woman of his destiny slip away. A member of an ancient clan of Scottish warriors, he grew up beside Shay Logan as her secret protector, but his heart compelled him to become more. Until Shay’s true identity was revealed, and the fated pair’s chance was gone…

But danger will drive them back into each other’s arms…

Shay fell for the boy next door, suspecting nothing of the ancient secrets he guarded. After a stinging betrayal, she’s determined to banish the memories of her first love forever. But the past can’t let go, and the boy she once loved has returned to her a warrior determined to protect her from the unspeakable evil fate has planned…"

Embrace the Highland Warrior was a fun read and an interesting take on the paranormal genre. Shay has lived a life filled with secrets which helped to drive a wedge between her and her childhood friend Cody. The chemistry between these two was instant and unrelenting. I started rooting for them to have a happy ever after from the very beginning of the book. I thought that the author took the paranormal genre and gave it a fresh twist with demons, highland warriors (of course), and even vampires. There was a lot of references to an ancient book that made me wonder if it will play a big part in the next book of the series. Shay was an awesome main character as she was both headstrong and tender at different times. She was surrounded for most of her life by both lies and secrets which came into play in the middle of the story. We got to see that she has some special abilities that hopefully we will learn more about as this series goes on. My only problem with this book was that there were so many characters that we didn't get to learn a lot about. I think that if I had read the first book in the series, this book would have been better for me and I would have enjoyed it more.

All in all, I did think that this was a good read that kept me entertained. I wish that I would have started with the first book, but I think that I'll go back and read it before continuing on with this series. That way I'll get the chance to get a better feel for some of the secondary characters. I would recommend this books to fans of paranormal romance but make sure that you start with Awaken the Highland Warrior!

Bottom Line: A good read and a series that I want to read more of.

Disclosure: I was sent a copy of this book for review from the publisher for review.
Posted by samantha.1020 at 4:57 PM