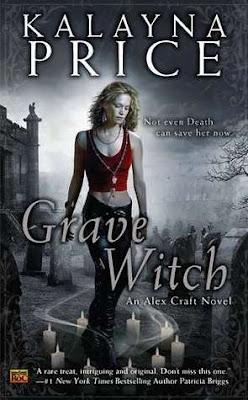 Alex Craft has a unique talent as a "grave witch" which allows for her to speak to the dead. The shades that she raises are usually harmless and easy for Alex to control until the day when she is attacked by one of them. Before Alex knows it, she is caught up in a mystery filled with dark magic and even darker beings who care little if she comes out of all this alive or not.

Grave Witch was one of those urban fantasy reads that I didn't want to put down. It left me wanting more after I turned the last page, and I've already went out and bought a copy of the second book which should tell you how much I enjoyed this one. First of all, Alex has such a unique talent as she can talk to the dead otherwise known as shades. With her ability to communicate with them comes her "grave vision" which allows for her to see the world in a different perspective than the average human. I really liked that her talents came with a price and it took a lot out of her to use her skills especially when she was left basically blind for periods of time. It helped to make this book very unique from other urban fantasy reads that are out there. The mystery that Alex found herself caught up in was very dark and creepy. It kept me on my toes and turning pages long after I should have gone to sleep. My only complaint with the book was that I was never a huge fan of the romance that was developing between Alex and Detective Falin. I think that it was because Falin had so many secrets of his own that we were never really privy to. Maybe in the next book we will learn more about him. I'm really excited to see what happens next and how the story develops.

All in all, this was a really solid beginning to this urban fantasy series. It was dark, gritty and extremely compelling and I'm hooked on the world that Price has created. Highly recommended to fans of urban fantasy!!

Disclosure: I checked this book out at my local library and promptly bought a copy of the 2nd book after finishing this one.
Posted by samantha.1020 at 3:24 AM