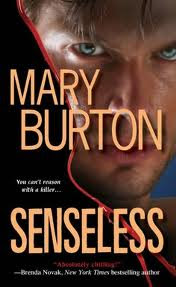 From the back cover:

"The vicious burns scarring the victims' flesh reveal the agony of their last moments. Each woman was branded with a star, then stabbed through the heart. With every death, a vengeful killer finds a brief, blissful moment of calm. But soon it's time for the bloodshed to start again..."

I'm always looking for a good thriller and Senseless didn't disappoint. This book was a page turner from the very beginning as the story starts with a brutal killing and then shortly after a fire and body. And with all of that I was instantly caught up within the story (I'm trying not to think about what that says about me...lol). The story is told from multiple viewpoints which can be a tricky thing at times but it worked for this book. There were a lot of characters to keep track of which was a bit confusing at first but once I had that squared away I was immersed within the book and its' storyline. Eva was one of the main characters and I really liked her. She had a dark past that she was trying to turn around from but it made her character more realistic and likeable for me. I understood the bitterness that was there at times and liked that the author didn't make everything easy for her. The mystery part of this book was well done and I didn't figure out who the killer was until the author wanted me to. And then it all made sense but I wouldn't have guessed it on my own. There was a little bit of romance thrown into the book but I felt that it only added to the storyline. This book was an enjoyable read and I'm looking forward to picking up the next book Merciless sometime soon!

Disclosure: This book was sent to me for review by the publisher (I believe). Unfortunately it was a month or two ago and I am just now getting to it. My apologies but also my thanks because now I have a new author to read :)
Posted by samantha.1020 at 5:11 PM