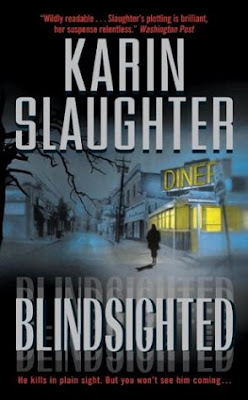 Blindsighted begins with the grisly death of a blind college professor named Sibyl Adams who was brutalized before her death. The chief of police, Jeffrey Tolliver, begins to investigate the murder with little evidence to go on. His ex-wife, Sara Linton, is the small town's coroner and it is up to her to provide any clues that she can find from the victim's body. But soon after a new victim is found and both Jeffrey and Sara realize that they may have a serial killer on their hands.
I ended up with mixed feelings on this book. On one hand, I was easily caught within the story from the very beginning. I had a hard time putting the book down. But...and this is a big but for me....the book was too graphic for me at times. I usually don't mind details and all but the murders and what was done to the bodies was a bit much even for me. And it caused me to step back from the book a couple of times. The characters were good and I liked that they weren't perfect nor were their relationships with each other perfect. I especially liked the interaction between Sara and Jeffrey which was interesting to read about. It made me want to see what is going to happen in future books as this is the beginning of a series. I did kind of have an idea as to who the killer was but there were questions left open at the end of the book that showed me I didn't guess everything. And I'm hoping that as I read the next book that maybe I'll get some more answers.
Bottom Line: A good/okay read but one I would recommend with hesitation or at least a warning and I will be continuing with the 2nd book at some point :)
Disclosure: I got this book from the library based on a recommendation from Staci at Life in the Thumb.
*I read this book for the following challenges:
100+ Reading Challenge
Suspense/Thriller Challenge
New Author Challenge
Support Your Library Challenge
Posted by samantha.1020 at 5:30 PM