You and Me and Us by Alison Hammer (thoughts) 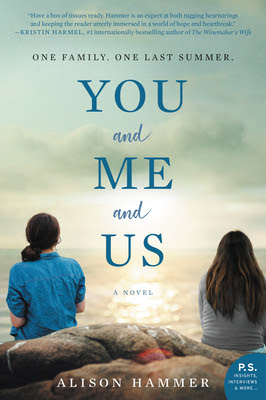 "Alexis Gold knows how to put the “work” in working mom. It’s the “mom” part that she’s been struggling with lately. Since opening her own advertising agency three years ago, Alexis has all but given up on finding a good work/life balance. Instead, she’s handed over the household reins to her supportive, loving partner, Tommy. While he’s quick to say they divide and conquer, Alexis knows that Tommy does most of the heavy lifting—especially when it comes to their teenage daughter, CeCe.
Their world changes in an instant when Tommy receives a terminal cancer diagnosis, and Alexis realizes everything she’s worked relentlessly for doesn’t matter without him. So Alexis does what Tommy has done for her almost every day since they were twelve-year-old kids in Destin, Florida—she puts him first. And when the only thing Tommy wants is to spend one last summer together at “their” beach, she puts her career on hold to make it happen…even if it means putting her family within striking distance of Tommy’s ex, an actress CeCe idolizes.But Alexis and Tommy aren’t the only ones whose lives have been turned inside out. In addition to dealing with the normal ups and downs that come with being a teenager, CeCe is also forced to confront her feelings about Tommy’s illness—and what will happen when the one person who’s always been there for her is gone. When the magic of first love brings a bright spot to her summer, CeCe is determined not to let her mother ruin that for her, too.As CeCe’s behavior becomes more rebellious, Alexis realizes the only thing harder for her than losing Tommy will be convincing CeCe to give her one more chance. "

This book was absolutely heartbreaking to read.  In all honesty, I don't think I've ever teared up while reading so many times.  I didn't sob but only because I kept setting the book down to allow myself time to get myself together.  It was also a hopeful read and one that I couldn't help but appreciate.  The thing that really struck me about this book is the importance of family and learning what really matters.  In the end, our family is what matters and thinks like work really don't matter as much.  I think that the author did a great job of delving into this topic without hitting you over the head about it.  She also did a really great job of portraying the difficulties working mothers can face with that work and life balance.  I do think that this is a book that you want to make sure that you are in the right mindset for.  It is about terminal cancer and is sad.  With everything going on in the world today (which is scary enough), I would recommend making sure that you are in the right head space for a book like this which can feel dark and depressing at times.  The author is able to give rays of hope throughout which I really appreciated.  I just cared about the characters in this book so much!  I feel like the author brought them to life for me and I almost wasn't ready for this book to end.  I wasn't ready to say goodbye to these characters (it felt like) after we had gone through so much together.  And that is the mark of a truly good book!

Overall, it feels wrong to say that I enjoyed this one due to the subject matter so instead I will say that I found this to be a thoughtful read that opened my heart to these characters and the struggles that they faced.  I think that the subject matter could be triggering so like I said previously, be aware that this book is sad and heartbreaking at times.  But also know that it is hopeful at others and such a great read overall! This is a debut author - and wow - I just cannot wait to see what she comes up with next.  I will certainly be ready and willing to read more by her in the future!  I would recommend this book to fans of contemporary fiction, fiction in general, and even women's fiction as there was a strong female friendship in this the book as well.  Also, I just have to say that this book is told in two points of view, one is Alexis' and the other is her daughter CeCe's point of view.  I think that the author did a wonderful job of portraying both of these two different points of views and the struggles that mothers and daughters can face in their relationships with one another.  Recommended!

Bottom Line:  A heartbreaking but hopeful read that will stick with me for a long time to come.