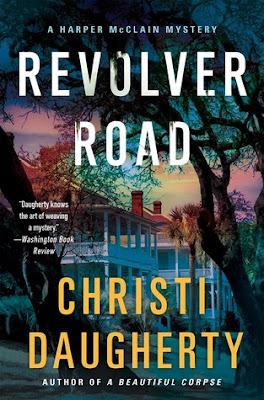 "Even in the chill of February, no place touches Harper McClain’s heart like Savannah. She should be walking beneath the historic city’s towering oaks, surrounded by graceful mansions. Instead, she’s hiding miles away on Tybee Island after a mysterious voice on the phone warned her that someone wanted her dead. The call was too specific to ignore. The caller knew everything about her. But that was months ago, and she’s getting tired of being scared.
Her only escape is her work at the newspaper, where the hottest story in town is the disappearance of Xavier Rayne. The singer had a hit album on his hands, and was about to go on tour, but then he walked out of his beachfront home and vanished. The police believe he drowned, but Harper suspects his disappearance may be more ominous than that. Something doesn’t feel right about it.His bandmates and actress girlfriend say he’s run away before. They expect him to come home. Until a body washes up with two bullet holes in it. Now everyone in Rayne’s life is a suspect. As Harper digs deeper into the case, though, the threats against her own life return. The phone call she received was very real. A killer from her past is coming for her."

This mystery series is one of my favorites!  I've been looking forward to this book every since finishing the second book - and I will be impatiently waiting and hoping for more of Harper in future books!  There is just something about the Savannah setting that draws me in and then the mysteries just don't let me go!  I do think that this is a series best read in order (there are only three books so far) because there are threads that started in the first book that play a very important role in this book.  Also, maybe skip the Goodread's summary if you haven't yet read those earlier books.  I found this book just as suspenseful as the previous two books which meant I found myself reading it as fast as I possibly could.  At the risk of sounding slightly spoiler-ey I will say that we get a lot of answers in this book which I couldn't help but appreciate!  Besides the mystery aspect, one of my favorite things about this series is the portrayal of Harper's job and what it's like to work at a newspaper in this day and age.  I always find it interesting and realistic to see the struggles that the newspaper faces and feel like that aspect really makes this series stand out among other mystery series.  The characters are great as well - and at this point I will read anything and everything that this author writes!  But please tell me that will be more of Harper McClain because I'm nowhere near ready to see this series end.  I think that you would enjoy this series if you are a fan of mysteries in general, are looking for something a bit different from your typical police procedural read, and also love a mystery with a setting that is brought to life in each book.  I highly recommend ALL of the books in this series - book one is The Echo Killing if you are interested and haven't had the opportunity to check it out yet! 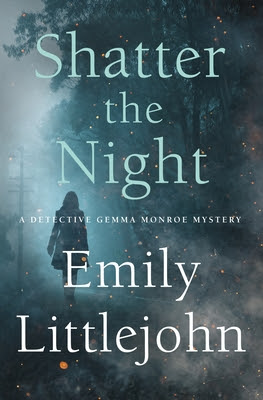 "It’s Halloween night in Cedar Valley. During the town’s annual festival, Detective Gemma Monroe takes a break from trick or treating with her family to visit an old family friend, retired Judge Caleb Montgomery, at his law office. To Gemma’s surprise, Caleb seems worried—haunted, even—and confides in her that he’s been receiving anonymous threats. Shortly after, as Gemma strolls back to her car, an explosion at Caleb’s office shatters the night.

Reeling from the shock, Gemma and her team begin eliminating suspects and motives, but more keep appearing in their place, and soon another man is killed. Her investigation takes her from a chilling encounter with a convicted murderer at the Belle Vista Penitentiary, to the gilded rooms of the renovated Shotgun Playhouse, where Shakespeare’s cursed play Macbeth is set to open in a few weeks.

Yet most disturbing of all is when Gemma realizes that similar murders have happened before. There is a copycat killer at play, and if Gemma can’t stop him, he’ll carry out his final, deadly act. "

Shatter the Night is the fourth book in a mystery series that I absolutely adore!  This author can write and beautifully at that!  There is something so atmospheric about her books that I just cannot get enough of.  I honestly always want to save her books but I can't (and don't) because they are just so good - I can't resist picking them up soon after they release!  This isn't a series that you necessarily have to read in order.  I think that each one could be read as a standalone but together they are that much better.  One of the things about this series that I can't get enough of (besides the writing which is just so gorgeous that I can't help but mention it again) is the characters.  These are characters that feel real with real life struggles.  Gemma is a mom that works to balance life as a police detective and being a mother.  She doesn't always balance these two things the best but I feel like that's real life.  It isn't always easy but the reality is that both things are important to her so she works at it.  I love that the mysteries always seem to keep me guessing which is exactly what this one did.  I also really appreciate the way that the setting and season play a role in these books.  This one was set around Halloween so you could feel the chill in the air at times and the end of fall coming.  It was just SO GOOD and I need more readers to find and love this series as much as I do!!  I've read and loved all four books in this series.  I think that you would enjoy this series if you are a fan of Louise Penny's Inspector Gamache series to start, are a fan of mysteries and police procedurals, or are looking for a mystery with standout atmospheric writing that paints a picture in your head.  I highly recommend this series and each of the books in this series including this one!

Disclosure:  I received a copy of this book courtesy of the publisher and NetGalley but ended up reading a copy from my local library.
Posted by samantha.1020 at 3:30 AM