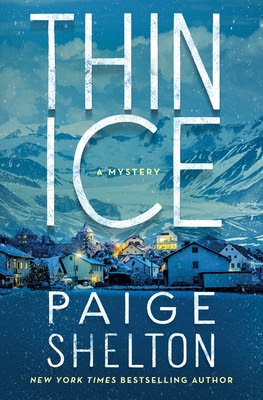 "Beth Rivers is on the run - she's doing the only thing she could think of to keep herself safe. Known to the world as thriller author Elizabeth Fairchild, she had become the subject of a fanatic's obsession. After being held in a van for three days by her kidnapper, Levi Brooks, Beth managed to escape, and until he is captured, she's got to get away. Cold and remote, Alaska seems tailor-made for her to hideout.
Beth's new home in Alaska is sparsely populated with people who all seem to be running or hiding from something, and though she accidentally booked a room at a halfway house, she feels safer than she's felt since Levi took her. That is, until she's told about a local death that's a suspected murder. Could the death of Linda Rafferty have anything to do with her horror at the hands of Levi Brooks?As Beth navigates her way through the wilds of her new home, her memories of her time in the van are coming back, replaying the terror and the fear--and threatening to keep her from healing, from reclaiming her old life again. Can she get back to normal, will she ever truly feel safe, and can she help solve the local mystery, if only so she doesn't have to think about her own?"

Thin Ice was a really great beginning to this new mystery series that I'm really excited to read more of!  I have a fascination with all things Alaska so when I realized that this book was a mystery set in Alaska I knew that I had to read it.  It didn't disappoint in the slightest!  Besides the Alaskan setting, I really enjoyed Beth's character and the mystery behind everything that happened to her.  It is almost like there are two separate mysteries in this book - the one that is currently happening with Linda Rafferty and the one with Beth and everything that previously happened to her which brought her to Alaska in the first place.  I was intrigued by both and it helped keep me turning the pages as fast as I could.  This is a book that has left me itching to get my hands on the next book in the series.  It is going to be a LONG wait for that second book.  The book itself has really great characters though and the Alaskan setting is just icing on the cake.  I'm going to leave my thoughts on this one really brief as I don't want to spoil anything.  Just know that this is a mystery that is definitely worth reading!  I will be continuing on with the series as soon as the 2nd book releases.  And I'll probably end up checking out the other books this author has written since I enjoyed this one so much.  I would recommend this book to fans of mysteries, suspense, and cozy mysteries as well.  I wouldn't necessarily classify this one as a cozy mystery but I can see it appealing to fans of cozies as well.  An easy book to recommend!

Bottom Line:  A great beginning to this new mystery series that has me seriously pining for the 2nd book!

Disclosure:  I originally received a copy of this book thanks to the publisher and courtesy of NetGalley.  I ended up grabbing a print copy from my local library and read that.  Honest thoughts are my own.
Posted by samantha.1020 at 3:30 AM