Little Pieces of Me by Alison Hammer (thoughts) 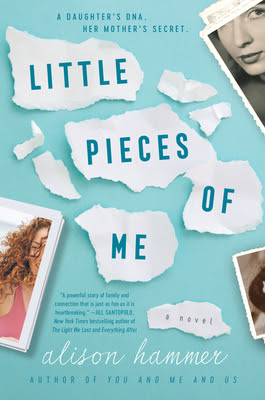 "When Paige Meyer gets an email from a DNA testing website announcing that her father is a man she never met, she is convinced there must be a mistake. But as she digs deeper into her mother's past and her own feelings of being the odd child out growing up, Paige begins to question everything she thought she knew. Could this be why Paige never felt like she fit in her family, and why her mother always seemed to keep her at an arm's length? And what does it mean for Paige's memories of her father, a man she idolized and whose death she is still grieving? Back in 1975, Betsy Kaplan, Paige's mom, is a straightlaced sophomore at the University of Kansas. When her sweet but boring boyfriend disappoints her, Betsy decides she wants more out of life, and is tired of playing it safe. Enter Andy Abrams, the golden boy on campus with a potentially devastating secret. After their night together has unexpected consequences, Betsy is determined to bury the truth and rebuild a stable life for her unborn child, whatever the cost.

When Paige can't get answers from her mother, she goes looking for the only other person who was there that night. The more she learns about what happened, the more she sees her unflappable, distant mother as a real person faced with an impossible choice. But will it be enough to mend their broken relationship?"
My Thoughts:
Little Pieces of Me is one of those books that is going to stick with me for awhile.  Last year I read (and was broken by but in a good way) this author's debut You and Me and Us.  If you haven't had the opportunity yet to read that one, I highly recommend it as well.  I was nervous to read this one because I enjoyed that first book so much so I was both afraid that it was also going to break me and I wasn't emotionally ready and also worried that I had too high of expectations set for this one.  This book though didn't disappoint in the slightest.    It was just as good of a read as her debut but also very different.  This author has a knack for looking at mother/daughter relationships and bringing them to life in all of their messy glory.  One of the things that I really enjoyed about this book was how real each of the characters felt.  They weren't perfect but instead had faults and just felt like normal, everyday people.  They made mistakes, poor decisions, and had insecurities that just helped me to become even more attached to them.  I even came to respect Paige's mother by the end although I still don't agree with the decisions that she made.  I also really liked how this book was told in two parts: one from Paige's viewpoint as she both learns and tries to deal with the fact that the man who she believed was her father wasn't and the second viewpoint from Paige's mother back in the past before and after she became pregnant with Paige.  It was interesting to see how the events from one viewpoint tied into and led to things that happened in the present.  All in all, this really was an enjoyable read and a good look at what makes up one's own identity.
Overall, I enjoyed my time with this book and feel like this is an author to watch.  Her books bring about strong emotions for me but in the best of ways.  I hope that she continues to dive into the mother/daughter relationship in different ways because she really does it well.  Readers who enjoy contemporary fiction, women's fiction, and books with characters that come to life for you should give this book a read.  An easy book (and author) for me to recommend!
Bottom Line:  A book that tugged at my emotions as both a mother and daughter.
CW: Grief, lying, cheating, adoption, death of a loved one
Disclosure:  I received a copy of this book thanks to the publisher.  Honest thoughts are my own.
Posted by samantha.1020 at 1:30 AM