The Hollows by Jess Montgomery (thoughts) 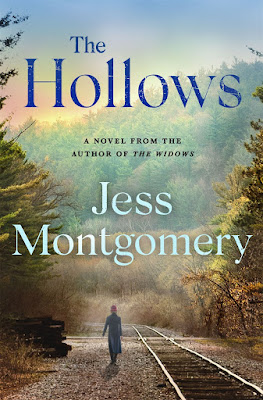 "Ohio, 1926: For many years, the underground railroad track in Moonvale Tunnel has been used as a short cut through the Appalachian hills. When an elderly woman is killed walking along the tracks, the brakeman tells tales of seeing a ghostly female figure dressed all in white.
Newly elected Sheriff Lily Ross is called on to the case to dispel the myths, but Lily does not believe that an old woman would wander out of the hills onto the tracks. In a county where everyone knows everyone, how can someone have disappeared, when nobody knew they were missing? As ghost stories and rumors settle into the consciousness of Moonvale Hollow, Lily tries to search for any real clues to the woman’s identity.With the help of her friend Marvena Whitcomb, Lily follows the woman’s trail to The Hollows—an asylum is northern Antioch County—and they begin to expose secrets long-hidden by time and the mountains."

Wow!  I am so, so glad that I had the opportunity to read this book and find this series.  It was SO good!  I picked this one up and almost instantly knew that it was the kind of book that you take your time with.  I've got to admit that's exactly what I did as I let the author wrap me up in the story that she was telling and these characters lives.  It wasn't always an easy read as it stays very true to the historical period that it is set in.  Women's rights are iffy at times and there was a different expectation of how a woman should behave back then.  It's set during a time period when integration was beginning to happen but not everyone was on board with it yet.  It touches on some very difficult topics to read about but I felt like the book handled them true to the time period in which it was set.  One of the things that I enjoyed most about this book was how the author brought these characters to life for me.  This is the second book in a series where I haven't yet read the first.  It didn't matter though because the author was still able to bring these characters to life in a way that they almost felt like old friends.  They had imperfections and didn't always make the best decisions but that made them feel all the more real.  I'm going to make a broad proclamation here with only having read the one book in this series but this book gave me serious Louise Penny vibes.  They are very different as this is a historical mystery whereas Penny's series is not.  But it is something about how both authors bring both the characters and the towns that they live in to life that really struck a chord with me.  I felt like I was there in the hollows when reading this book right alongside of Lily and her friends.  It was just SO good and I'm so excited to have found this author and series!

Overall, I really enjoyed this book and will definitely be reading more in this series!  The more historical mysteries I read, the more I realize how much I enjoy this genre.  This book was a definite standout for me!  I don't think that you should rush through reading this one but instead just take your time with it like I did.  It was a really wonderful reading experience that way!  I really was able to connect with the characters - even when at times I was frustrated with the choices that they were making.  I won't be waiting long to read the first book and then I will eagerly be waiting for the next release!  This a book that I can highly recommend!

Bottom Line:  An atmospheric mystery that I just couldn't get enough of!

Disclosure:  I received a copy of this book thanks to the publisher as part of a TLC book tour.  Honest thoughts are my own.
Posted by samantha.1020 at 3:30 AM