The Cost of Honor by Diana Muñoz Stewart (thoughts) 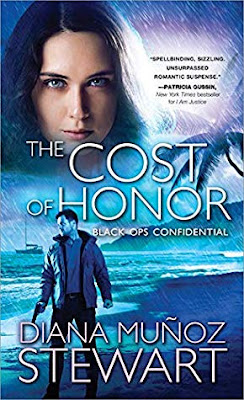 "He gave up everything to escape his family

The only male to be adopted into the notorious Parish family, Tony Parish always did right by his vigilante sisters. But when an attempt to protect one of them went horribly wrong, he had to fake his own death to escape his fanatical family. Tony set sail and ended up in Dominica—face to face with the woman of his dreams...
Now he must give up Honor to save her
After the death of her mother, Honor Silva moved to Dominica, where her family could help her heal and move on. But her activist mother left her more than money, she left her proof that could take down one of the richest and most powerful men in the world.
Tony gave up everything he thought he knew when he fled his family. But when a threat too dangerous for Tony and Honor to fight on their own closes in, he has no choice but to go to them for help. Problem is, they'll demand something in return—something that could cost Tony not just Honor, but also the love that changed him forever."
My Thoughts:

I am officially hooked on this series!  A few months ago I read (and really enjoyed) the second book in this series The Price of Grace.  It left me completely excited about this book and happily it was just as good as I had hoped!  What a page turner this book was!  I swear I was 100 pages into this one and then all of a sudden I hit this point and knew that I wasn't going to be able to stop reading until I finished.  It was just that good and I HAD to see how everything was going to turn out.  One of the things that I really liked about this book was that there were two separate threats that Tony and Honor are facing.  One is an unknown threat to Honor's business that Tony is attempting to help her with.  The second one is the threat that Tony's family will find him and wipe his memories. These two things added a lot of suspense and tension to this book.  It also helped for me to really understand and get behind the relationship that developed between these two.  I'm not usually one for relationships that develop super fast - I prefer the building up of a relationship the majority of the time.  Not in this case though because I was completely behind their relationship and the why's that they were diving into it so fast.  They knew that there time was limited together so they weren't going to waste one second of the time that they did have.  They had the perfect blend of chemistry and heat which had me rooting for their happy ever after the entire time.  I really, really liked this book so I'm eager to see if there are going to be more books in this series.  In the meantime, I need to go back and finally read that first book that started this series.  I do recommend reading these books in order if possible.  I didn't feel like it hurt my enjoyment in the second book at all (not having read the first) but by the time that you get to this one, I'm sure there are too many spoilers otherwise.  Also, things that happened in that second book definitely carry over into this one so that's another reason to read them in order if at all possible.  Plus, the two that I've read were so good so definitely worth your time!

Overall, I really enjoyed my time with this book and this series in general so far.  I'm really, really hoping that we get more books featuring the Parish family because I'm not ready for it to be done.  This book had the perfect blend of heat and suspense - this is romantic suspense at its best in my opinion!  I would recommend this book and series to fans of romantic suspense, romance, and even suspense readers in general.  Read it in order if you can or start with The Price of Grace like I did!  An easy book to recommend!

Bottom Line:  The perfect blend of romance and suspense - what more do you need?

Disclosure:   I received a copy of this book thanks to the publisher as part of a TLC book tour.  Honest thoughts are my own.