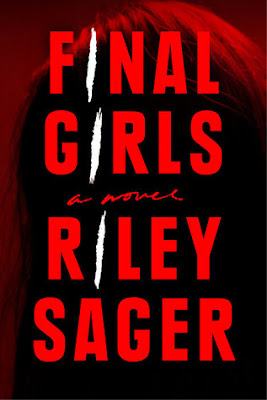 "Ten years ago, college student Quincy Carpenter went on vacation with five friends and came back alone, the only survivor of a horror movie–scale massacre. In an instant, she became a member of a club no one wants to belong to—a group of similar survivors known in the press as the Final Girls. Lisa, who lost nine sorority sisters to a college dropout's knife; Sam, who went up against the Sack Man during her shift at the Nightlight Inn; and now Quincy, who ran bleeding through the woods to escape Pine Cottage and the man she refers to only as Him. The three girls are all attempting to put their nightmares behind them, and, with that, one another. Despite the media's attempts, they never meet.

Now, Quincy is doing well—maybe even great, thanks to her Xanax prescription. She has a caring almost-fiancé, Jeff; a popular baking blog; a beautiful apartment; and a therapeutic presence in Coop, the police officer who saved her life all those years ago. Her memory won’t even allow her to recall the events of that night; the past is in the past.

That is, until Lisa, the first Final Girl, is found dead in her bathtub, wrists slit, and Sam, the second, appears on Quincy's doorstep. Blowing through Quincy's life like a whirlwind, Sam seems intent on making Quincy relive the past, with increasingly dire consequences, all of which makes Quincy question why Sam is really seeking her out. And when new details about Lisa's death come to light, Quincy's life becomes a race against time as she tries to unravel Sam's truths from her lies, evade the police and hungry reporters, and, most crucially, remember what really happened at Pine Cottage, before what was started ten years ago is finished."

Final Girls was on my radar to read before it was even released which makes it so crazy that I waited until now to read this book!  I read that premise and just KNEW that this was a book that I had to read.  Let me tell you though that this book deserves all of the hype and praise that it has gotten!  This was one whirlwind of a ride and a book that I won't be forgetting about any time soon!  I'm not going to lie - I picked this book up with pretty high expectations after seeing so many other readers love this one.  Happily enough this book was able to live up to those high expectations and so much more.  I picked this book up and was basically hooked from page one.  I found myself unable to set it down and really didn't want to.  For me, this was one of those books where I just had to see what was going to happen next.  And even when Quincy was making stupid choices, I didn't want to stop reading.

One of the things that I loved most about this book was the horror vibe that it had going on.  I'm not a huge horror movie fan but I've watched enough of those types of movies to recognize that same feel in this book.  It really added this layer of suspense and tension to the story!  I also really enjoyed the fact that as the reader I didn't know whether or not to trust Sam and her intentions.  I'm pretty sure that isn't a spoiler as it is alluded to in the above summary.  Books where you aren't sure who to trust are basically my reader catnip.  I just cannot resist books like this!  I found myself just so completely caught up within the pages of this book.  I can't say it any better than that!  And that ending was just absolutely not what I was expecting in the least!  I am being very careful here as I don't want to overshare and spoil anything but wow, wow, wow!  I loved the way that this book ended and I won't say any more than that.

This book was easily a five star read for me and made my top reads list for 2017!  It was such an intense reading experience!  I will be reading anything/everything that this author writes after loving this book so much.  What makes it even better is that he has a new book releasing in 2018 for me to look forward to!  I read this one in a matter of a few days because I just couldn't stop reading and had to see how it would all end.  It was a wild ride and one that I won't be forgetting about any time soon.  I would highly, highly recommend this book!  Such a great read!

Bottom Line:  One of the best thrillers that I read it 2017!

Disclosure:  I received a copy of this book thanks to the publishers and NetGalley.