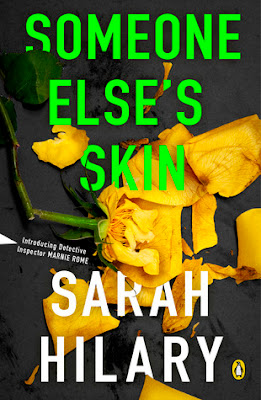 "Five years ago, a shocking and bloody crime left Detective Inspector Marnie Rome’s parents dead. Not even her partner, Detective Sergeant Noah Jake, knows much about Marnie’s past. Though as one of the few gay officers on the force, Noah’s not one to over-share about his private life either.

By chance, Marnie and Noah are at the domestic violence shelter when Hope Proctor stabs her husband, Leo. It should be an open and shut case of self-defense, but none of the eight witnesses tells quite the same story. And the question remains: How did Leo get into the secure building? As the violence spirals, Marnie finds herself drawn into a place where the past casts long shadows and she must tread carefully to survive."

It's funny because I've been wanting to read this book for quite some time but it kept getting put aside for other things.  I've even checked it out from the library multiple times but it kept going back unread.  Somewhere in there I thought that I knew what this book was going to be like or about (probably from reading the above summary so many times).  This book was so much better than I ever could have guessed though!  And the moral of that story folks is that you shouldn't wait so long to read the books you really want to because they are probably even better than you expected.  Case in point.  I'm getting off track though so let's get back to the book and what it is actually about.  Marnie and Noah literally walk into a shelter seconds after a woman stabs her husband.  This is the only truth that you know.  After that is when the questions start and really they don't end until the end of the book.  Honestly, I couldn't figure out how the author was going to pull off the witnesses all giving different versions of what happened (see above summary - not a spoiler).  She really did a great job with it and it rang true which didn't feel possible at first.  I also thought that it added a layer of tension to the story very similar to when you have an unreliable narrator.  Who do you believe?  Where any of them actually telling the truth on what happened?

I'm going into slightly spoiler-ey territory here so be warned.  One of the things that I liked most about this book was how the author took what I thought was happening and completely flipped it on its' head.  I totally didn't see the truth behind it all so to speak.  I really don't want to give it away for other readers so I'm going to leave it at that.  This wasn't an easy read at times - domestic violence is one of those subjects that isn't always comfortable to read about to say the least.  It was a page turner though - and one of those books that I won't be forgetting about any time soon.  I would be remiss not to mention how completely intrigued I am by the storyline that relates to Marnie's past.  I need to know more so I'm really hoping that future books in this series will give us some answers.

Overall, this was quite the beginning to a new series, and will in all honesty end up being a five star read for me!  I am really lucky because I have three more books in this series to look forward to.  I don't think that I will wait that long to get my hands on the next book.  I find that I'm really excited about both this author and this series!  I can't wait to see what else she comes up with in future books.  It is a bit early yet to say this (as I've only read one book) but this series reminded me a bit of Sharon Bolton's Lacey Flint series which I absolutely adore.  Highly recommended!

Bottom Line:  A five star read - that should tell you enough!

Disclosure:  I received a copy of this book thanks to the publisher and NetGalley.
Posted by samantha.1020 at 3:30 AM