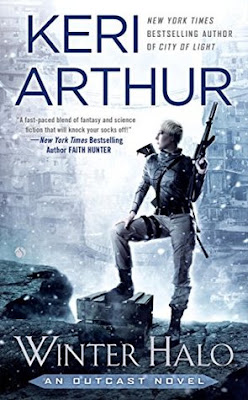 Summary from Goodreads:
When the bombs that stopped the species war tore holes in the veil between worlds, they allowed entry to the Others. Now, a hundred years later, humans and shifters alike live in artificially lit cities designed to keep the darkness at bay....

The humanoid supersoldiers known as the déchet were almost eradicated by the war. Ever since, Tiger has tried to live her life in peace in hiding. But in the wake of her discovery that Central City’s children are being kidnapped and experimented on, Tiger’s conscience won’t let her look the other way.

The key to saving them lies within the walls of a pharmaceutical company called Winter Halo. But as she learns more about the facility, Tiger’s mission is derailed by a complication: Winter Halo’s female security guards are being systematically attacked by an unknown force.

Now Tiger must summon all her gifts to stop those responsible for both atrocities—no matter the cost to herself...

I am loving this series so much! I read the first book in this series, City of Light, earlier this year and just adored it. I've been pining for this book every since I finished and was so excited to finally get the chance to read this one. I'm happy to say that I enjoyed this book just as much as I did the first book. What a mark of a great series (and author)! One of the things that I love most about this series is how original and unique it feels. Tiger is a déchet which is both a very rare and dangerous thing to be in this new world. Tiger was created in a laboratory and created for a specific purpose which gives her many special skills and abilities. The entire world that Arthur has created with shifters, vampires, wraiths, and all kinds of other supernatural creatures just feels so fresh to me. I can't seem to get enough of it! Then you add in a fast paced storyline where Tiger constantly gets herself into trouble and I found myself flying through this book as fast as I could.

This might be slightly spoiler-ly (there is your warning) but I really liked that with this book we got to see more of Tiger's relationship with Jonas. I like that the characters are starting to trust Tiger more and find that I'm anxious for more of that in the third book. My one and only complaint with this book was that it definitely had a build up to the next book feel. There was resolution at the end so don't get me wrong but there was also a lot of set up for book three. It didn't bother me too much though as now I'm absolutely chomping at the bit to get my hands on that next book. The wait is going to be the hardest part!! I'm going to have to move on to one of Arthur's other series while I wait for this next book to be released. The ending of this book was completely intense! I got to a point where I just couldn't see how it was all going to end and the author had me on the edge of my seat. It was completely worth the ride and I am left eager for more.

Overall, this is by far one of my favorite new series that I have found in 2016. It is pretty rare that I'm caught up with a series but when the books are this good...well, how could I not be? I think that fans of science fiction and urban fantasy would both enjoy these books. I do think that you should start with book one first just so that you get the full back story as this second book continues on after events from the first. You don't have to as the author does a pretty great job of refreshing the reader on everything that happened but I just think the reading experience would be better reading in order. I would highly recommend this book and the series. I can't say enough good things about it!

Bottom Line: Such a great follow-up to book one! I need more!

Disclosure: I received a copy of this book thanks to the publisher courtesy of NetGalley.

My thoughts on City of Lights are here if you are interested.
Posted by samantha.1020 at 3:30 AM