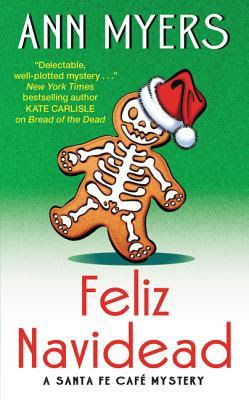 What she doesn’t plan for is murder.

Rita discovers a dead actor during the premier performance but vows to keep clear of the case. Sleuthing would upset her mom. Besides, there’s already a prime suspect, caught red-handed in his bloodied Santa suit. However, when the accused Santa’s wife begs for assistance—and points out that Celia and other performers could be in danger—Rita can’t say no. With the help of her elderly boss, Flori, and her coterie of rogue knitters, Rita strives to salvage her mother’s vacation, unmask a murderer, and stop this festive season from turning even more fatal."

I adore this cozy mystery series so as soon as I heard about this book I couldn't resist the chance to read it!  There aren't very many series that I am completely caught up on but this is one of them because it is just so good (and the books are such fun reads).  Feliz Navidead was such a great addition to this series and the perfect read for this time of year!  In this book Rita finds herself drawn yet again into another murder investigation but with added stresses since her mother is visiting for the holidays.  I loved reading about Rita trying to juggle everything that was going on especially as it seemed that her mother had some secrets of her own.  I enjoyed the mystery portion of this story as it had me guessing throughout the entire book.  It is the characters though that make this series so great for me.  Reading this book was like chatting with old friends again- there is just something about these characters that I absolutely adore!

In this book we also had the chance to see some of Flori's new antics which included "rogue knitting".  Flori is hilarious and I love all of the trouble that she gets herself into.  If your curious as to what rogue knitting is, it is knitting things in the night onto/covering public property (like statues or park benches).  It cracks me up with the crazy things that she comes up with.  I also liked that we got to see more of Rita and Jake's relationship.  I'm a fan of that one so it was nice to see this book focus on it a bit more.  Without spoiling anything, the author did set up a possible story line for a future book that I am very curious about.  It didn't have anything to do with the ending of this book though which I felt like tied up everything very nicely.  In fact, this was probably one of the more suspenseful endings in this series so far.  I was actually sad to see this book end as I just enjoy this series so much!

Overall, this was another great addition to one of my favorite cozy mystery series!  The added bonus was the holiday theme that just made reading this book in December absolutely perfect.  I don't always read holiday themed books during this time of year but I'm really glad that I did with this one.  It helped to put me in the holiday spirit especially when the snow was falling outside while I was reading.  I'm a huge fan of this series (obviously) and have read them all, but I do think that you could read this book on its' own or out of order if you haven't read the other two.  I would recommend reading the entire series though as this is only book three and they are all definitely worth it.  I highly recommend this book especially at this time of year!

Disclosure:  I received a copy of this book thanks to the publisher as part of a PICT tour.

Feliz Navidead Can Be Found on: HarperCollins 🔗, Amazon 🔗, Barnes & Noble 🔗, and Goodreads 🔗.

Ann Myers writes the Santa Fe Café Mysteries. The first book in the series, Bread of the Dead (2015), introduced café chef and reluctant amateur sleuth, Rita Lafitte. Rita and her friends stir up more trouble in Cinco de Mayhem (March 2016) and Feliz Navidead (October 25, 2016). Ann lives with her husband and extra-large house cat in southern Colorado, where she enjoys cooking, crafts, and cozy mysteries.
You can find Ann online on Facebook at https://www.facebook.com/AnnMyers.writer/ and her website http://www.annmyersbooks.com/
Posted by samantha.1020 at 3:00 AM