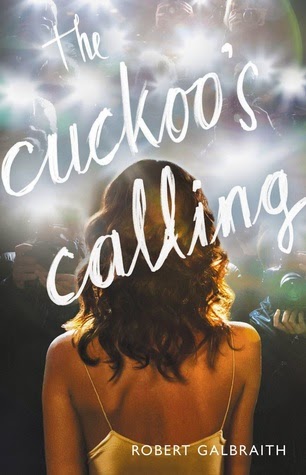 The Cuckoo's Calling is one of those mysteries that slowly draws you into its' pages.  I found myself caught up within the mystery quite easily which meant that I had a hard time setting this chunkster down.  My wrists were sore from holding the book by the end but it was definitely worth it.  I think that the question that is present throughout most of the book of whether a murder has really taken place or not made this book that much better for me.  Because it really always isn't as cut and dry as some books make it, and this questioning atmosphere really added to the suspense in my opinion.  Let me explain with a give you a quick summary before I go any further.

In this book, Cormoran Strike has basically hit rock bottom.  He is in a great deal of debt, doesn't have any clients but one, and is now living out of his office thanks to breaking up with his long time girlfriend/fiancee.  Enter John Bristow who comes to Strike looking for him to investigate the death of his sister, a famous model that is believed to have jumped to her death.  John refuses to admit to the possibility that this troubled woman might have committed suicide but instead insists that it must have been murder.  Against Strike's better intentions, he agrees to look into Lula Landry's death for Bristow.  Strike begins to find more questions than answers even though almost everyone that he meets believes that she killed herself.  Will Strike be able to figure out the truth behind this tragedy?

This book was on my radar even before I heard that J.K. Rowling had written it.  Then I heard that Rowling was using a pseudonym and Galbraith was really her...and you get the picture here, right?  Instantly this book skyrocketed to my TBR list just because.  Where it just sat because sometimes when you love an author's books so much you begin to wait for that one book that is going to break the spell.  Or at least I do that which is a really bad habit.  Although this book was completely different from the Harry Potter series in every way possible, it was such a good book that manages to stand on its' own merit quite well.  I found myself immersed in this book in the best possible way.  It made me realize (yet again) that I just do not read enough chunky books.  As an avid reader sometimes I find that I stay away from these longer reads just because I don't want to commit to them.  It is definitely my loss because books like this are why I should be reading longer books!  Galbraith's attention to details builds the atmosphere and storyline in a way that just draws the reader in.  I loved that I was constantly trying to figure out if a murder had really happened or not.  Comoran doesn't give a lot away in regards to his emotions and it helped to really keep me guessing.  Did he think that John Bristow was just in denial or did he really think that somebody had committed cold blooded murder?  I spent half of the book just trying to figure out the answer to that exact question.

While the book slowly swept me into it, it was the characters that really made this book a great read.  I loved Comoran's character from almost the very beginning of this book.  He is just such a great character- unapologetic, imperfect, and yet someone that you are almost instantly drawn to.  I felt like he was a real person by the end of the book.  The storyline took its' time building up but really managed to blow me away at the end.  I mean, what?!?!  I totally didn't figure out any part of the ending whatsoever.  And that is all I'm going to tell you so that I don't spoil anything.  This was a great beginning to a new mystery series that I cannot wait to read more of!  Bring on more Comoran Strike!

Overall, this is very likely going on my top reads list for the year!  I just really enjoyed my entire reading experience and was sad to see the book end.  The only bright spot is knowing that the second book has already released so that I don't have a long wait for book two.  I'm eager to see what other kinds of trouble that Comoran can get himself into.  This mystery series is a long ways away from my Harry Potter addiction but the best part is that I can love them both for their differences.  Besides, it makes me wonder what else J.K. Rowling can possibly have in store for us readers....the possibilities are endless and super exciting!  Highly recommended!

Bottom Line:  A mystery series that became an instant favorite!

Disclosure:  I checked this book out from the library...I want it for my own shelves though!