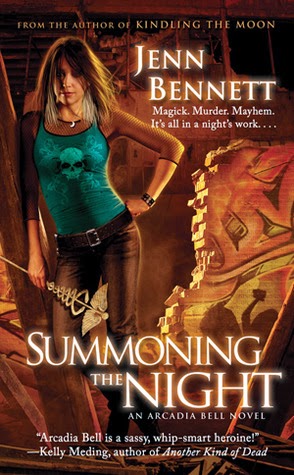 Give a brief summary of the book (minor spoilers from book one):

In this book Arcadia Bell is just starting to settle down after all of the craziness that happened in Kindling the Moon.  She is spending lots of time with her boyfriend Lon and his son Jude.  And she is learning to start to deal with her new "moon child" powers that she has just recently discovered.  Unfortunately, Cady finds herself caught in the search for a mysterious kidnapper who is kidnapping children.  The missing kids are all children of member's of the Hellfire Club.  The kidnappings are reminiscent of a past set of kidnappings that happened more than thirty years ago.  It will be up to Lon and Cady to figure out what is going on before the next child disappears forever.

Summoning the Night was a really solid follow up to Kindling the Moon, and I have to say that I adored it even more than the first book.  There is just something about this series that I can't get enough of.  I find myself instantly drawn into the books and that is exactly what happened as I read this one.  One of the reasons that I like this series so much is that I really enjoy all of the characters.  Arcadia isn't your typical heroine as she just seems so down to earth.  I love the growing relationship that she is developing with Lon and his son Jude.  It all just seems so normal and not exactly what I've come to expect with urban fantasy series.  I mean a series where one of the main characters has a kid?  And the kid actually plays a pretty important role?  I love it!  This book continued to show more of Cady's powers as they begin to grow and she learns a bit more about them.  I like that she really doesn't know anything about what it means for her to be the "moon child", and  I think that we will learn more in future books.  It gives me a sense of anticipation, and I will admit that I am anxious to read the next book!  This book was just as action packed as the first one.  I had a really hard time setting it down, and flew thru the pages.  Overall this book was just really, really good!

There is only one complaint I have and that is there was one small storyline that was left unfinished.  I would have liked to see it resolved but maybe it will be in future books.  I won't say more because I don't want to spoil it for anyone.  Honestly, there really isn't anything negative to say about this book.  This is such a great series!

This is a must read series for fans of urban fantasy in my opinion!  This book had everything I look for including great characters, lots of twists and turns, and a mystery that kept me guessing until the last page.  I'm eager to see what this author comes up with next!  And what kind of trouble Arcadia finds herself in next of course!  This series has really kick-started my current urban fantasy addiction once again.  There needs to be more characters like Cady out there in the book world.  I would definitely recommend this one but start with the first book Kindling the Moon.

Bottom Line: A series that isn't to be missed!

Disclosure:  I received a copy of this book thanks to the publisher.  Thoughts are my own!

Here are my thoughts on Kindling the Moon if you are interested.
Posted by samantha.1020 at 3:30 AM