The Walking Dead: Volumes 1 and 2 (thoughts and a discussion of the show) 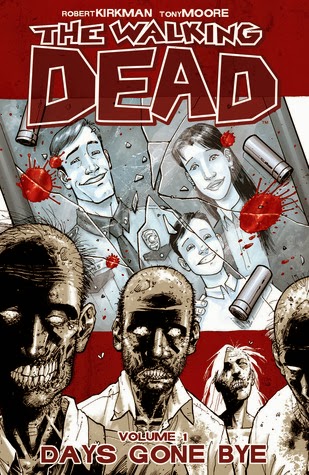 Word of warning from the beginning that this post will be filled with possible spoilers.  For both the show and the graphic novels so you might want to skip this post entirely if you haven't had the chance to experience either of these yet.  May I highly, highly recommend both the show and graphic novel series to you though?  I'm so completely addicted to both that it isn't even funny!  So anyways...

In Days Gone Bye, Rick wakes up from a coma to a completely changed world.  His family is missing and there are zombies aka walkers aka roamers (in the graphic novels that is what Rick calls them) everywhere.  He sets out to find his family and gets a first hand taste of this new world along the way.

What I really liked about this first volume was how closely the show followed this volume with the first season.  There are some major differences of course but the majority of Season 1 follows the storyline in this comic in the best ways possible.  The comic goes much, much faster with the storyline in comparison to the show.  Heck, Shane is already dead by the end of this one, and it is Carl that shoots him?!?!  I totally didn't see that one coming!  I loved that so many of my favorite characters are present in both the show and comic.  I'm definitely missing Daryl's character though.  I also found it interesting that in the graphic novel Lori never thought that Rick was dead.  Instead, she left him heading for Atlanta thinking that he would be safe in the hospital.  Say what?  For me, I found myself liking Lori less in the comic compared to the show because of this.  In the show, she believes he is dead.  It made more sense to me for why she turned to Shane and for everything that happened afterwards.  Of course, that is just my opinion but I liked Lori's character so much more on the show.  Overall, this was a fun way to spend a few hours and I felt like I had the chance to connect to the characters more because of it! 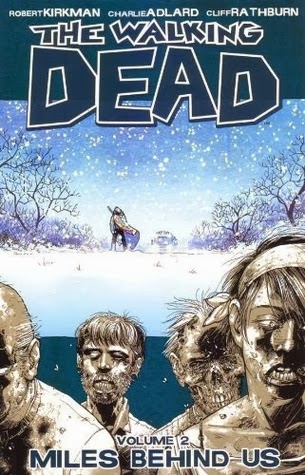 In Miles Behind Us, the group is trying to deal with the aftermath of Shane's death along with a few other group members.  They set off in search of shelter and food hoping to find safety from the walkers as well.

Wow!  This volume is so different from the television series and yet the main points are the same.  I love, love, love comparing the two!  It is fun to see which one works better for me and why.  Tyreese is introduced in this volume along with his daughter and her boyfriend.  No Sasha?  Boo!  This was a big surprise for me as we don't see Tyreese until a lot further on into the show.  Plus, Carol and Tyreese?  What?!?  Dale and Andrea?  Are you kidding me?!?!  I'm not so sure how I feel about that one...I will tell you that.  I feel like Andrea's character in the television series was so much stronger than it has been in the graphic novels so far.  We meet Hershel in this volume and experience the farm.  Glenn and Maggie fall in love here (yay!) but then the end?  Glenn stays behind with Maggie and Hershel?  He's NOT part of the group any longer??  Say what?!?  Hahaha!  I feel like all I keep saying is what?  But there were so many surprises and huge differences with this graphic novel in comparison to the show.  We saw a flashback of Shane and Lori turning to each other.  Lori, you knew Rick was still alive!! Ugh!  I found that I was still more frustrated with her character in the comic than I ever was with her in the show.  And the show definitely gave Hershel a better character arc than the comic series has so far.  I continue to be surprised with how much faster the graphic novel series goes.  But it is a good thing I think since that means that the show can go on for many more seasons!  I am hoping that it continues on for awhile since I love it so much!  Oh yes, and they discover the prison at the end of this volume which is almost bittersweet since we saw the destruction of the prison in this season of the show.

Overall thoughts on the graphic novel series so far:  they are fun to read!  I spend half of my time reading them comparing them to the show in every way possible.  What characters are missing?  What major events are happening?  The other half of the time I just find myself completely immersed in the dark world that this author has created.  I love that the author is using this series to really comment on society and the possible break down of it.  It is a scary world that these characters live in, but it is more terrifying seeing how individuals react to this new world.  I will definitely be reading more of this series...in fact, I'm planning on putting volume three on hold at the library right now.

Overall thoughts on the television series:  is that I cannot get enough!  I look forward to every single Sunday thanks to this show and will be completely lost when I have to wait for season five.  Daryl makes the show so much better and I adore both his and Rick's characters.  I think that they are doing a really amazing job hitting the important parts of the graphic novel series while not being an exact replica of it.  But more Norman Reedus please and thank you!

Disclosure:  Both graphic novels were checked out from my local library.

P.S.- I am SO sorry if I spoiled anything for anyone in this post.  But I've been wanting to discuss it here on the blog now for so long that I just couldn't resist!
Posted by samantha.1020 at 3:30 AM