The Tender Mercy of Roses by Anna Michaels (thoughts) 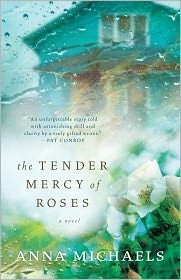 "While the body of rodeo star Pony Jones lies motionless in the northern Alabama woods, her spirit is on a mission to find her killer. Invisible to the eye but not to the sixth sense, the only thing Pony can do is guide the living to the truth.

Her grief-stricken father, Titus, wants nothing more than retribution for his daughter's death, so when former police detective Jo Beth Dawson comes to town, something compels him to seek out her help.

But when Jo Beth and Titus team up to track down Pony's murderer, it turns loose a whirlwind of intense emotion and unexpected encounters. As they uncover more and more clues leading them to the killer, dark family secrets are revealed and the two must search their souls for redemption."

The Tender Mercy of Roses was a quiet novel driven by the main characters and the secrets that have shaped their lives. The story is shaped by Jo Beth, a former detective turned self-destructive alcoholic, with the weight of the world on her shoulders. Jo Beth is one of those characters that I couldn't help but feel for from the very beginning. Both her past and her downfall are given to us in pieces throughout the story. This helped to add layers to the story as Jo Beth is pulled into the investigation of Pony's death. My favorite part of this book was hands down the characters in the story. I felt they were well developed, realistically portrayed, and just were plain interesting. I wanted to read about their stories, figure out the secrets that they were possibly hiding, and see how it all tied into the mystery of Pony's death. The mystery was part of the story but it wasn't the main focus. Instead, the focus of the story was the past and how hidden secrets affected all of the character's lives. It was Pony's story, her father Titus' story, and of course it was Jo Beth's story as well. I was pleasantly surprised at how much I enjoyed this novel. The writing was gorgeous at times and I found myself just going along for the ride that the author was leading me. This wasn't a fast-paced novel by any means but instead a novel that was meant to be savored and enjoyed. I really liked the atmosphere created within the book. The author was able to create a haunting atmosphere where nothing is what it seems and the most important thing was staying true to oneself. I found the ending to be very satisfying and I was sad to see it end. All in all, this is a book that I wouldn't hesitate to recommend especially to those who enjoy literary fiction. Recommended!

Disclosure: I was sent this book to review from the publisher as part of a Gallery Books Blog Tour. My thanks for the chance to share my honest thoughts!