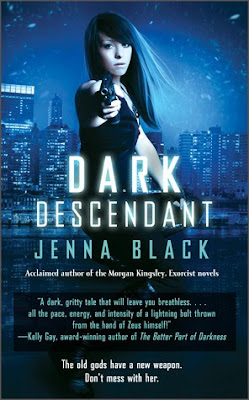 "Nikki Glass can track down any man. But when her latest client turns out to be a true descendant of Hades, Nikki now discovers she can’t die. . . .

Crazy as it sounds, Nikki’s manhunting skills are literally god-given. She’s a living, breathing descendant of Artemis who has stepped right into a trap set by the children of the gods. Nikki’s new “friends” include a descendant of Eros, who uses sex as a weapon; a descendant of Loki, whose tricks are no laughing matter; and a half-mad descendant of Kali who thinks she’s a spy.

But most powerful of all are the Olympians, a rival clan of immortals seeking to destroy all Descendants who refuse to bow down to them. In the eternal battle of good god/bad god, Nikki would make a divine weapon. But if they think she’ll surrender without a fight, the gods must be crazy. . ."

I thought this was a solid beginning to a new urban fantasy series. In my opinion, Jenna Black has created an original debut filled with gods, olympians, descendants, and a little bit of mythology tossed in. I was hooked from the very beginning especially with all of the suspense that was interspersed throughout the story. I don't usually skim or skip ahead but there were times when I just couldn't wait to see what was going to happen next. I had to know right then and I cheated just to see...LOL! That is a sign of a good story in my opinion. Nikki was an interesting main character as she starts to learn about both her immortality and powers that come along with being a descendant. I would have liked to see her have a little more confidence in herself but it was easy to understand why she didn't have it. Her past made her more than a little vulnerable and it was interesting to see how it affected her choices. The Olympians were more than a little scary and I'm looking forward to seeing the role that they play in the next book. Overall, I found this to be a solid debut, and I'm looking forward to reading more about Nikki and the new world that she finds herself in. Recommended!

Disclosure: I was sent a copy of this book for review as part of a blog tour for Gallery & Pocket Books SciFi/Fantasy Group. Unfortunately this review is a bit late due to extenuating circumstances..my apologies!
Posted by samantha.1020 at 6:47 AM