The Keep by Jennifer Egan 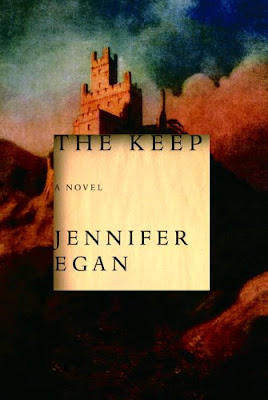 Even though I read this book earlier this year (and just never reviewed it), I'm thinking that this is the perfect time to review it as fall begins to change the colors of the leaves and the nights get cooler. I picked up The Keep when I saw it was longlisted for the Orange Prize Project in 2008 and I'm glad that I did. The Keep was a slightly eerie read with lots of atmosphere and weird happenings going on.
The book begins with the main character Danny going to Germany to help his cousin Howie renovate an old castle into a hotel. Except that Danny and Howie haven't seen each other since they were teenagers and had a mysterious "prank" go awry on them. The tension between the two characters is there from the start even if the reader is only getting Danny's viewpoints and has to guess on Howie's actions and motivations. Before long Danny is caught up in the midst of eerie happenings that are more strange then anything and the question remains, "Why did Howie ask him here?"
Okay, I'm not even sure if that synopsis/brief summary of mine makes sense because this book is SO strange and there is so much more going on. I alluded to the fact that the reader knows how Danny feels and what he is thinking but it isn't Danny that is telling the story. In fact, it is an unknown narrator who is in prison for reasons unknown. Like I said, strange. The multiple stories and viewpoints that are all really the narrator's story make up for an interesting combination. And the author does a great job of creating a creepy atmosphere filled with tension from the start. While for the first half of the book I didn't quite know what was going on, I didn't really care and was more than happy to see where the book was going to go next. Howie and Danny's friendship was different and Howie was a mysterious character that I could never quite figure out. Danny was also a character with lots of different questions surrounding his background and the life that he had been previously living. I liked it though that I was constantly questioning everything and getting pulled into the story. This book was filled with mystery, suspense, and a little bit of gothic thrown all together to create a weird but good read.
Final Thoughts: Interesting. I'm not sure what to say other than that. Just an interesting but strange read (and it WAS a bit strange).
Disclosure- Library book.
*I read this book for the following challenges:
New Author Challenge
100+ Reading Challenge
Orange Prize Project (longlist in 2008)
Support Your Library Reading Challenge
"K" Title for A-Z Challenge (personal)
Posted by samantha.1020 at 5:13 PM