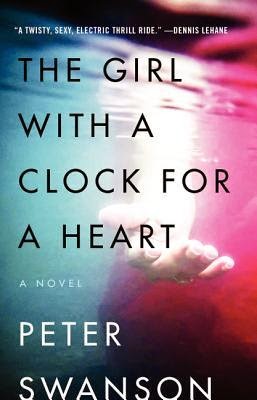 The Girl With a Clock For a Heart was a book filled with both layers and questions.  Add to that almost constant suspense and lots of action and you are in for a very thrilling read!  I feel like this is a book that is a bit outside of what I usually read, and I enjoyed it all the more because of that fact.  This was another book that I just didn't want to set down!

In this book George Foss runs into a girl from his past,  Liana Decter, at a local bar.  Liana is an old college girlfriend that he has never forgotten and even after all these years still thinks about from time to time.  Liana is in trouble and asks George for his help which he reluctantly agrees to.  But it is that hesitation and events from George's past when he knew Liana before that really comes into play.  Because George knows that he should stay as far away from Liana and her troubles as possible, but he just can't seem to tell her no....

There are two different story arcs in this book but they both tie together perfectly.  One is the story of Liana and George's past and what happened to make him suspect her of murder.  The second story line is all about Liana and George as she pulls him into her current troubles.  Both of these story lines are completely compelling and fast paced.  The majority of the time when an author does this I prefer one over the other but that wasn't the case with this book.  Because I was so caught up with what was happening and the whys of it all, that I just wanted to know it all.  I wanted to know the truth behind what had happened between George and Liana when they first met.  And I really, really wanted to know what was going on in the present day and why Liana had come to George for help a second time.

I felt like from the very beginning I knew that I didn't quite trust Liana's motives.  I was frustrated with George's actions at times because of this.  If I knew that he shouldn't trust her without even knowing all of their shared history, then he should have been smarter than getting involved.  George's constant questioning of her actions and true feeling added to the layers of questions that I had though.  Then you had the pieces of their history that were given and I really had even more questions rather than answers.  It all combined into this constant feeling of suspense and waiting for the other shoe to drop.  I knew it was coming and still I was taken by surprise.  The ending of the book was frustrating but it fit so perfectly with the way the story was going so I couldn't complain.  This book was one hell of a ride and completely worth it!

Overall, I really enjoyed this one and am eager to read more by this author.  It was fast paced, intense, and filled with suspense.....three of my favorite things!  I liked the way the author took events from the two character's past and tied them to the present.  It made the book that much more suspenseful for me!  I can easily recommend this one but especially to fans of both suspense and thrillers.  This is a book that shouldn't be missed!

Bottom Line:  A book that pulled me into the story with layers of suspense and never let me go!

Disclosure:  I received a copy of this book from the publisher as part of a Partners in Crime book tour.  Thoughts are my own!