Notes on an Execution by Danya Kukafka (thoughts) 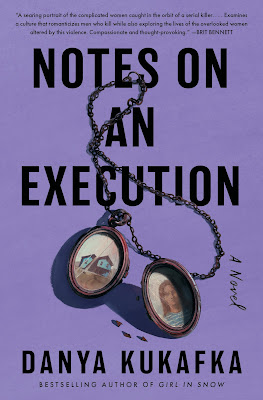 "Ansel Packer is scheduled to die in twelve hours. He knows what he’s done, and now awaits execution, the same chilling fate he forced on those girls, years ago. But Ansel doesn’t want to die; he wants to be celebrated, understood. He hoped it wouldn’t end like this, not for him.

Through a kaleidoscope of women—a mother, a sister, a homicide detective—we learn the story of Ansel’s life. We meet his mother, Lavender, a seventeen-year-old girl pushed to desperation; Hazel, twin sister to Ansel’s wife, inseparable since birth, forced to watch helplessly as her sister’s relationship threatens to devour them all; and finally, Saffy, the homicide detective hot on his trail, who has devoted herself to bringing bad men to justice but struggles to see her own life clearly. As the clock ticks down, these three women sift through the choices that culminate in tragedy, exploring the rippling fissures that such destruction inevitably leaves in its wake. Blending breathtaking suspense with astonishing empathy, Notes on an Execution presents a chilling portrait of womanhood as it simultaneously unravels the familiar narrative of the American serial killer, interrogating our system of justice and our cultural obsession with crime stories, asking readers to consider the false promise of looking for meaning in the psyches of violent men."
My Thoughts:
Wow, what an amazing book to start my reading year off with!  If there is one book that I convince you to pick up this year, I think that I want this one to be it.  I will say that I want readers to go into this one with the right expectations.  I wouldn't call it a thriller (although I have seen it on lists of upcoming mysteries and thrillers) or really even a mystery.  If I had to classify it, I think that I would go more with literary suspense.  I'm not even sure that fits this book perfectly but I do feel that is more accurate than trying to label it as a thriller or mystery.  This is one of those books that isn't meant to be rushed through.  Instead, this is one of those books where you just need to let go and enjoy the ride that the author is taking you on because it is perfection.  The thing that stood out for me with this book was the focus on the characters and especially on the victims.  This book is about Ansel Packer (who has killed multiple women and is now on death row) but it really isn't.  It's instead about his mother, the sister of his wife, and the female detective who arrested him.  And most importantly it is about his victims and the women they might have been.  I loved how the author took the time to consider those women throughout the story and the impact that they might have had.  It was a reminder of everything that was taken from them - the lives they could have led and the different things that they missed out on.  It was both beautiful and heartbreaking at the same time.  The writing itself was gorgeous at times and deserved to be savored.  There were just sentences that hit me hard and I had to sit with.  It wasn't always an easy read (especially at the end) but it was a really excellent read that will stick with for some time to come.
Read this book if you enjoy character focused reads or are looking for a book that isn't your average serial killer story.  I really cannot say enough good things about this book - it is super early to say this but I would be really surprised if it didn't make my top reads list for the year.  Now I'm off to add this author's other book to my TBR because again - wow!
Bottom Line - An easy five stars!
Disclosure - I received a copy of this book thanks to the publisher.  Honest thoughts are my own.
Posted by samantha.1020 at 1:30 AM