Nothing to Fear by Juno Rushdan (thoughts) 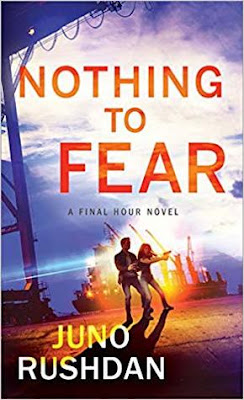 "Fearsome Gray Box operative Gideon Stone is devoted to his work and his team. He's never given reason to doubt his loyalty...until he's tasked with investigating Willow Harper, a beguiling cryptologist suspected of selling deadly bio-agents on the black market.
He knows she's innocent. He knows she's being framed. And he knows that without him, Willow will be dead before sunrise.Thrust into the crossfire of an insidious international conspiracy, Gideon will do anything to keep Willow safe...even if that means waging war against his own. With time running out, an unlikely bond pushes limits―and forges loyalties. Every move they make counts. And the real traitor is always watching..."

Let me tell you how much I enjoy romantic suspense when it is done like this!  Books like this are why I enjoy this genre so much.  This book was the perfect blend of suspense and romance.  I was turning the pages as fast as I could the majority of this book while reading, but also just loving the developing relationship between Willow and Gideon.  And can we just shout out the fact that Willow is on the spectrum and the amazing way that the author writes her character.  She is who she is and we got to the struggles that she faces from being "different" (for lack of better word here) as well as the strengths that she has from it.  It isn't something that is glossed over at all in this book but is instead such an integral part of her character.  I cannot honestly say that I've ever read a romantic suspense book featuring a character like this until now which is a shame. How lucky am I though that I have another book in this series to catch up on after enjoying this one so much?  The chemistry between Gideon and Willow was HOT!  I enjoyed that they each had their own issues that they needed to work through before they were ready to even think about being in a relationship.  And I also have to say how much I appreciated that their romance came together during reasonable times - and not when they were literally in the middle of being chased by the bad guys like it does sometime in other books of this genre.  The feelings that grew between the two of them felt natural and I was completely here for it all.  I have a copy of the first book but didn't get the chance to read it before this one and it didn't affect my enjoyment in the slightest.  I'm super excited though to go back to that first book after enjoying this one so much!

Overall, I really enjoyed my time with this book immensely!  It was the perfect mix of suspense and romance with characters that I just couldn't get enough of.  I'm so glad that I have now found this author and series because this book was that good!  I don't want to say too much more as I don't want to spoil anything.  If you enjoy action-packed, suspenseful books with romance mixed in, check this one out.  I would highly recommend it and am really looking forward to seeing what other readers think of it!

Bottom Line:  A book that has me just itching for more books just like it!

Disclosure:  I received a copy of this book courtesy of the publisher as part of a TLC book tour.  Honest thoughts are my own.
Posted by samantha.1020 at 3:30 AM