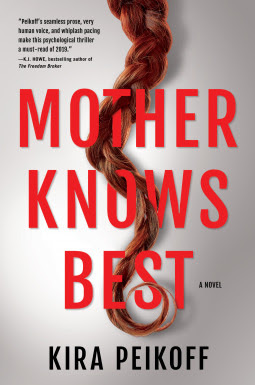 "Claire Abrams’s dreams became a nightmare when she passed on a genetic mutation that killed her little boy. Now she wants a second chance to be a mother, and finds it in Robert Nash, a maverick fertility doctor who works under the radar with Jillian Hendricks, a cunning young scientist bent on making her mark—and seducing her boss.
Claire, Robert, and Jillian work together to create the world’s first baby with three genetic parents—an unprecedented feat that could eliminate inherited disease. But when word of their illegal experiment leaks to the wrong person, Robert escapes into hiding with the now-pregnant Claire, leaving Jillian to serve out a prison sentence that destroys her future.Ten years later, a spunky girl named Abigail begins to understand that all is not right with the reclusive man and woman she knows as her parents. But the family’s problems are only beginning. Jillian, hardened by a decade of jealousy and loss, has returned—and nothing will stop her from reuniting with the man and daughter who should have been hers. Past, present—and future converge in a mesmerizing psychological thriller from acclaimed bestselling author Kira Peikoff."

What an interesting and compelling read!  I breezed through the pages of this book in a matter of two short days because I just couldn't stop reading.  I will say that this isn't a long book which is another reason why it was such a bingeable read for me (not sure if that's a word but it should be).  What I really liked about this book though was that the author took what is a controversial issue and made me see both sides of it.  This book shows firsthand the heartache that Claire has dealt with after losing her son and the fear that having another baby with the same genetic issues causes her.  You feel for her and want for her to have that chance of a healthy child.  There's also that question present of if science is going too far and where is the line in the sand type of thing throughout the book.  I fully admit that I don't know enough about the subject to have strong opinions one way or the other which meant that I just found the story compelling.  For me, I cared about the characters and what was going to happen to them.  This is billed as a thriller from the above description, and it is a thrilling read in the fact that you can't put it down.  But really for me this was more of a suspenseful book where I just wanted everything to be okay and turn out for the best for everyone.  I'm not sure if I'm explaining that really well to be honest.  I just don't want readers to go in expecting this psychological thriller when for me at least it was different then that.  More maybe then what you usually get with thrillers.  It was thrilling though and oh so hard to put down!  I'm hesitant to say much more than that because I don't want to spoil anything for readers.  I'm looking forward to seeing what others think about this one for sure!

Overall, I enjoyed my time with this book and am eager to read more by this author.  The subject matter of this book really made it stand out for me as it is so different from my usual reads.  This is my first book by this author but it certainly won't be my last!  I would recommend this book to readers to fans of suspense and thrillers as well.

Bottom Line:  One of those books that I just couldn't set down until the very end!

Disclosure:  I received a copy of this book thanks to the publisher and Meryl Moss Media.  Honest thoughts are my own.
Posted by samantha.1020 at 3:30 AM