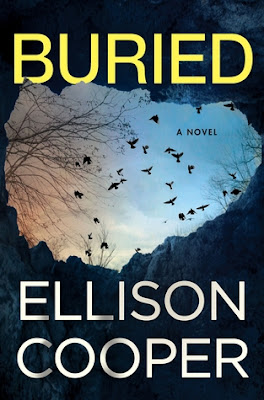 "Senior Special Agent Sayer Altair studies the minds of psychopaths. But even she didn't expect to uncover a killer within the Federal Bureau of Investigation. Rooting him out and exposing internal corruption got her a bullet wound and six months of desk duty. Now, she's finally back in the field, called in when an off-duty FBI agent and his cadaver dog fall into a sinkhole filled with human bones.

Found deep in Virginia's Shenandoah National Park, the skeletal remains date back almost two decades, the same time a beloved local teen disappeared. The cold case quickly heats up when Sayer's team finds two fresh corpses among the bones. When a gruesome clue ties these new bodies to a woman recently kidnapped along with her young daughter, Sayer has to uncover the connection between the old bones and the new bodies before the mother and child become the next victims.

But the killer is one step ahead, attacking her team and sabotaging their efforts. With Sayer's investigation compromised and unsure of who to trust, she receives unwanted help from Subject 037, one of the anonymous psychopaths she is currently studying. She has the chilling realization that he's someone powerful in Washington D.C.--and he is not about to let a mundane serial killer jeopardize his own ominous agenda for Sayer... "

This book was so phenomenally good!  Wow, wow, and just wow!  For me, there is nothing better then a book that starts with a bang and never lets up.  This book had me reading so fast and I was so completely engrossed that I was tempted to skip ahead just to see what was going to happen.  Thank goodness for the short chapters or I wouldn't have been able to resist.  Last year I read and adored the first book in this series titled Caged.  It was actually a five star read for me so that should tell you all that you need to know!  This book was just as good and has me absolutely pining for the third book in this series.  What makes this book (and series) stand out for me though is the characters and the attachments that I've formed to them.  I don't say this often but I do think that you need to read this series in order to get the full experience.  There is a lot that comes into play from book one that carries over into this book (for example a story line that we will hopefully get more answers on in the next book).  All of that is to say that you should probably read these in order for the best reading experience.  The characters in this series though are just all so great!  Sayer is one of those great characters that you cannot help but root for.  She is still struggling with events from the previous book (trying not to share spoilers here) and is thrown into a brand new case where there are lots of questions but not very many answers.  I loved that in this book the author wasn't afraid to completely pull the rug from under my feet multiple times.  I would be just going along reading when out of nowhere something completely unexpected but compelling would happen that had me reading at a frantic pace yet again.  I blew through this book in a matter of days because I just HAD to see what was going to happen next.  Even when I started to suspect the killer, I thought that I was wrong and off base until the very end.  I also really, really love the storyline relating to what is going on at the FBI and what really happened to Sayer's fiancé Jake.  This book added in an unknown character that also has me very, very intrigued.  It is going to be a very long wait for the next book in this series!

Overall, I enjoyed this book immensely and cannot say enough good things about this series.  I am so loving the fact that I have been finding these great mystery series with female leads - I cannot get enough of them!  This is honestly another five star read for me so this author is two for two which is pretty darn impressive!  I feel like I've been mostly gushing over this book but it deserves it.  A book that is thrilling, keeps you guessing, and has an original mystery with great characters is my version of perfection.  I really hope that more readers find this series because it is well worth your time.  I would recommend this book to fans of mysteries, thrillers, and suspense.  Highly, highly recommend this series but start with that first book if you can!

Bottom Line:  A five star read for me - that should tell you all that you need to know!