The Last Time I Saw You by Liv Constantine (thoughts) 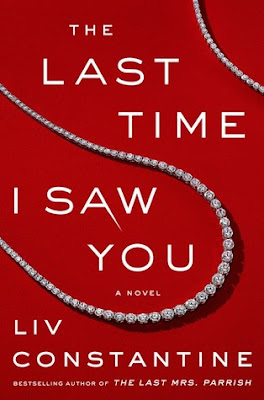 "Dr. Kate English has it all. Not only is she the heiress to a large fortune; she has a gorgeous husband and daughter, a high-flying career, and a beautiful home anyone would envy.


But all that changes the night Kate’s mother, Lily, is found dead, brutally murdered in her own home. Heartbroken and distraught, Kate reaches out to her estranged best friend, Blaire Barrington, who rushes to her side for the funeral, where the years of distance between them are forgotten in a moment.
That evening, Kate’s grief turns to horror when she receives an anonymous text: You think you’re sad now, just wait. By the time I’m finished with you, you’ll wish you had been buried today. More than ever, Kate needs her old friend’s help.
Once Blaire decides to take the investigation into her own hands, it becomes clear that all is not as it seems in Baltimore high society. As infidelity, lies, and betrayals come to light, and tensions rise to a boiling point, she begins to alienate Kate’s friends and relatives with her relentless, accusatory questions, as she tries to find Lily’s killer. The murderer could be anyone—friend, neighbor, loved one. But whoever it is, it’s clear that Kate is next on their list. . ."
My Thoughts:
The Last Time I Saw You was the perfect book to lose myself within during the long wait between games one weekend at my youngest son's baseball tournament.  I sat under a tree and just immersed myself in this thriller.  It was the perfect page turner that almost made me wish the time between games was longer (I say almost because then I was a bit lost after I finished this one and didn't have another book on hand).  The book is told from two different perspectives: Kate's and her former best friend Blaire.  We know from the beginning of the book that Kate and Blaire were super close when they were younger and then something happened causing a rift in their friendship.  Blaire returns though when Kate's mother is murdered and begins investigating when it is clear that Lily's murder is just the beginning.  What I liked about this book was that there was a layer of unreliability to it that causes the reader to question what's going on.  I don't want to go into too many specifics but there are things that happen that made me unsure of who to fully trust.  I love that type of thing in thrillers so of course I was completely hooked.  There isn't much else I can say that wouldn't be considered a spoiler.  I wasn't sure on my feelings on Kate until the end of the book - there was a level of detachment with her character where I couldn't decide if I liked her or not.  I will say that I really liked the way the author wrapped everything up with this book.  It worked for me in a way that I would have said it wouldn't have when I was in the middle of the book.
Overall, I really enjoyed my time with this book!  I'm glad that I have another of this author's books to look forward to.  This is one of those rare books that I managed to read in just a little over a day (which doesn't happen very often).  I just couldn't set this one down and really didn't want to.  I'm excited to have found this author and will be watching for anything new that she comes up with.  I just really liked this book a lot!  I would recommend it to fans of thrillers and suspense.  I also think that mystery readers in general would enjoy this one.

Bottom Line:  A page turning read that I couldn't set down!

Disclosure:  I received a copy of this book thanks to the publisher.  Thoughts are my own.
Posted by samantha.1020 at 3:30 AM