What Remains of Me by Alison Gaylin (thoughts) 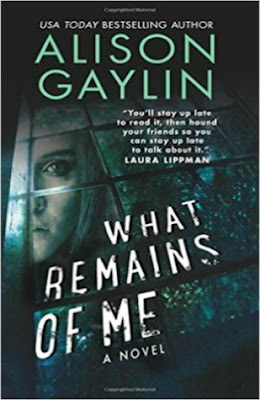 "On June 28, 1980, Kelly Michelle Lund shoots and kills Oscar-nominated director John McFadden at a party in his home . . . and instantly becomes a media sensation. For years, speculation swirls over the seventeen-year-old’s motives. Convicted of the murder, she loses her youth and her freedom—but keeps her secrets to herself.
Thirty years later—and five years after her release from prison—the past has come back to haunt Kelly. Her father-in-law, movie legend Sterling Marshall, is found in a pool of blood in his home in the Hollywood Hills—dead from a shot to the head, just like his old friend John McFadden.Once again, Kelly is suspected of the high profile murder. But this time, she’s got some unexpected allies who believe she’s innocent—of both killings—and want to help clear her name. But is she?"
My Thoughts:

What Remains of Me was one of those mysteries that slowly swept me away as I tried to figure out exactly what had happened so many years ago.  It was a book that had layers to it - each layer needed to be peeled back so that we could see the full truth behind what happened so long ago and in the present.  I enjoyed the fact that there were two mysteries within this book: the first being the mystery of what really happened thirty some years ago and the second being if Kelly is involved in the murder of her father in law now.  The two questions are tied together so closely that I constantly felt that the answer to one should also end with the answer to the other.  It gave this book such a unique layer of tension and atmosphere as the reader doesn't know if they can fully trust Kelly or not.  Is she innocent of this new murder?  Did she actually murder John McFadden so many years ago and why?  There were just so many questions swirling around in my head while I read and it really added to my enjoyment of this book!  The only thing that that took away from my reading experience with this book is hard to put into words.  I enjoyed this book the entire time that I was reading it but I was never "wowed" by it.  I've heard such good things about this author and I obviously agree as I mostly enjoyed this book but it just didn't stand out for me like I had hoped that it would.  This book has such a unique and compelling premise but I'm not 100% that it lived up to it.  It was really good - don't get me wrong but I just wouldn't classify it as great.  I think it would be fair to rate it as a four star read overall so take my feelings with a grain of salt as that is still a really good rating!

Overall, I did enjoy my time with this book and am looking forward to reading more by this author.  I've actually got the first book in a series she has written on my own shelves so I'm really looking forward to giving that a try next.  I liked the way it was set up and also how the author tied everything together in the end.  Yes, I was able to predict parts of it but there were also some surprises thrown in there too.  I'm thinking that this may have slightly been a case of my expectations being a bit too high because when I think about the book as a whole and my reading experience with it....well I did have a lot more positives rather than negatives.  I'm going to recommend this book to fans of both suspense and mysteries.