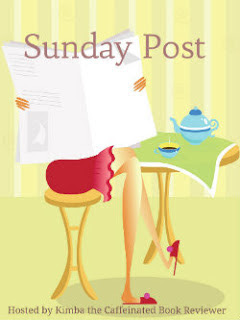 The Sunday Post is a weekly meme hosted here @ Caffeinated Book Reviewer. It’s a chance to share news~ A post to recap the past week on your blog, showcase books and things we have received. Share news about what is coming up on our blog for the week ahead. See rules here: Sunday Post Meme"

Morning!  Sundays are fast becoming my favorite day of the week.  Football, good food, and lots of time to relax.....what more could a girl ask for?  Not much new happened this week besides the usual.  My youngest had his best flag football game of the season so far this year scoring two touchdowns (one by intercepting the ball).  He was thrilled and it was a really fun game to watch.  It was homecoming week for my oldest son which is always fun.  He plays for both JV (junior varsity) and the freshmen teams so we spent Friday and Saturday watching his teams play.  I love every minute of it!

Somehow I also managed to finish not one but two books this week!  I was pretty impressed with myself if I do say so!  Now I need to really work on catching up with the reviews for the books that I've been reading lately.  Next week looks just as busy (I feel like I say that every week but it is the truth) as this one was.  Added to all of the football games though is the fact that my daughter has a softball tournament.  I love watching her play so it will be a fun change of pace after watching football to then go watch some softball.  I probably won't be posting next week as Sunday is when the bracket play really begins and we will hopefully be at the softball fields all day.  Don't worry, I'll have my book with me for in between innings and games.  LOL!  But on to the books.  Here are the books that I finished this week: 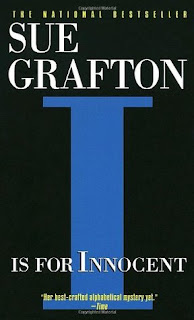 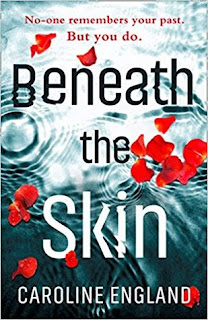 I is for Innocent by Sue Grafton - It was SO great to get back to this series!  I flew through the pages of this book, and was almost sad when it ended as it was so great reading about Kinsey's adventures again.  I won't be waiting as long before I continue on with the next book in one of my favorite mystery series!

Beneath the Skin by Caroline England - This was a compelling but unexpected read.  It is being billed as a psychological thriller but I don't know that I would necessarily agree.  Instead it was more of a drama relating to these different families that were entangled with one another in different ways.  There were a few unexpected twists which is maybe where the thriller label is coming from but I actually thought that this book was more than that.  It was one I won't be forgetting about any time soon! 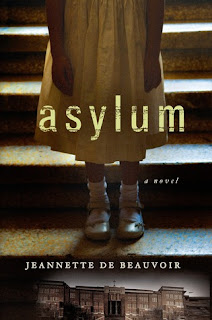 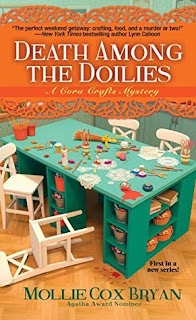 Asylum by Jeannette De Beauvoir is my current print read.  Friday night I was trying to figure out what to read next as I had finished the above two books.  I had a stack of books laying out on my bed and made my husband (not a reader) choose.  He chose this one based off the title alone.  Ha!  I'm about 100 pages in and enjoying it so far.  Death Among the Doilies by Mollie Cox Bryan is my new kindle read.  I've been in the mood for a cozy mystery and this is the beginning to a new to me series.  I haven't actually begun reading this one yet but have it ready to begin.

Plans for today include enjoying the peace and quiet.  My little two have gone to a friend's house for the afternoon which is a nice change of pace after having sleepovers here the past two nights.  I see a lot of laundry in my future.  Blogging and reading as much as possible.  Definitely relaxing as much as possible while still getting ready for the upcoming week.  No rest for the wicked and all that!  I'm off to work on some reviews.