It's that time of year when I find myself playing catch-up a bit.  I love the idea of starting off the new year with a clean slate (when it comes to book reviews) but never find that it happens the way I plan.  Since I'm thirteen books behind, I've decided to write up some mini reviews.  I am thinking that this will also help me to share my thoughts on books that are part of a series which I really struggle to review while keeping spoiler free. 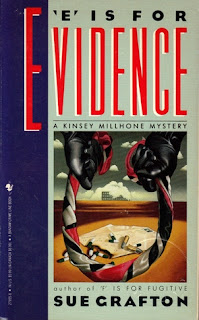 E is for Evidence by Sue Grafton was another very enjoyable installment in Grafton's alphabet series (is it accurate to call it that because I like it?).  In this one Kinsey finds herself under investigation thanks to an unexplainable deposit in her checking account and a questionable insurance claim.  Kinsey is in hot water but that isn't going to stop her from investigating and working to prove her innocence.

Kinsey is such an amazing main character.  She is smart, spunky and instantly likeable.  I love that this series is set back in a time period before technology was so advanced.  I enjoy watching Kinsey use her investigative skills as the mystery unfolds.  Each book in this series has been unique compared to the one before it all while staying true to Kinsey's character.  This book had me really worried about Kinsey at different points as she worked to prove her innocence.  And the storyline helped to ratchet up the suspense a few more notches as I waited for Kinsey to figure out exactly what was going on.  Just writing up my thoughts on this one makes me want to pick up the next book in this series.  If you are ever looking for an engrossing mystery series, than I would definitely recommend this one.  I do think that you should start at the beginning with A is for Alibi.

Bottom Line:  A must read series and one of my personal favorites! 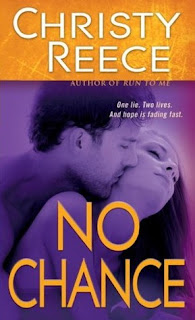 No Chance by Christy Reece is a romantic suspense that brings two young former lovers back together.  Skylar James finds herself in danger like she has never known after being kidnapped while trying to save a friend. Enter Gabe Maddox into the picture: former estranged lover hired to find Skylar and bring her back home safely.  Gabe and Skylar will both have to put the past to rest before they can truly find happiness again.

This was an enjoyable read at the time but looking back I've almost completely forgotten it.  I think that part of the problem that I had with the book was once again the character connection.  Whenever I don't connect with the characters, I find that the reading experience is a less memorable one or a book that I don't care for.  And I liked this book enough but it just didn't wow me like I had hoped.  The suspense was there but nothing that had me on the edge of my seat.  I did enjoy the romance between the two main characters as we watched them deal with their shared history.  It made it even better as they began to learn more about each other as they are now rather than the way they were back then.  Overall, if I did ratings I think that I would give this one 3 stars.  Not amazing but not a bad read either.  And a book I enjoyed enough to make me want to read more by this author.

Bottom Line:  An okay read but one that didn't blow me out of the water. 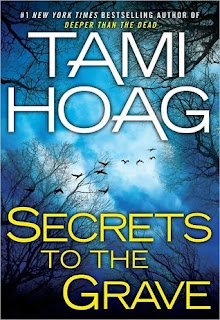 Secrets to the Grave by Tami Hoag brings back Anne Leone from Deeper Than The Dead as she is called in to act as the advocate for a young girl found laying across her dead mother's body.  Anne is swept away in this new mystery while still dealing with the after effects of the previous book's storyline (sorry trying not to share too much here).  The mystery of this book lies with with who the murdered woman was and uncovering all of her buried secrets.

I really, really enjoyed Deeper Than The Dead when I read it awhile back so I think that I went into this book with high expectations.  And while I found this book to be good/bordering on better than good, I never quite connected with this book either.  I just didn't like it as much as I did the previous book which really surprised me.  The suspense was there, the mystery was there, but for whatever reason I never connected. I feel like this is one of those "it's not you, it's me" moments.  That makes it sound like I didn't like this book (I did) but really I just didn't enjoy it as much as I expected to.  I did like the fact that many of the characters from the previous book were all still in this one.  I also appreciated how so much of what happened in the previous book tied into this one.  It made for a solid reading experience on that end.  And it made me look forward to eventually reading the 3rd book.  Hopefully, I'll have a better reading experience with the next book.

Bottom Line: A thriller that just didn't quite fit what I was looking for while still being enjoyable.  Mixed feelings anyone??
Posted by samantha.1020 at 5:30 AM